Mircea Mazuru
Honda has revealed its full 2023 vehicle line-up at the EICMA trade show in Milan, Italy. The highlights include the return of the Hornet, a new XL750 Transalp model, and the debut of Honda’s first European electric two-wheeler.
6 photos

The scooter is named EM1 e: (colon included) and is set to be released in summer 2023 at a price that hasn’t been disclosed yet. It’s a step toward Honda’s carbon neutrality goal for its motorcycle line-up during the 2040s. The model was unveiled following Honda’s announcement to introduce ten or more electric motorcycles worldwide by 2025.

“EM” stands for Electric Moped. The vehicle is designed to be an easy and fun way of transportation for a young demographic. Very little technical information has been released, so we’ll have to go by what we can see. It features simple and modern styling that showcases its unique identity within the Honda range. The flat-floored scooter is compact and ideal for commuting around town in a quiet and emission-free way. It boasts LED front and rear lights, and the turn signals are integrated into the handlebar.

The EM1 e: is powered by the Honda Mobile Power Pack (MPP) e:, a highly durable swappable battery that allows easy removal. It’s housed under the scooter’s seat. The MPP is designed to withstand different temperatures, impacts, vibrations, and humidity levels. You’ll get more than 40 km (25 miles) of range on a single charge.

It’s clear that Honda is focusing on a more sustainable urban mobility strategy. The company announced late last month that it’s beginning sales of its Power Pack Exchanger e: battery swapping stations in Japan. Although this type of station is yet to be appropriately adopted in Europe, the fact that Honda is beginning sales of a model compatible with battery-sharing technology shows that European implementation might come next. 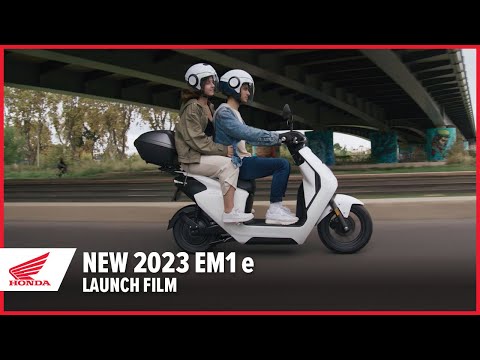