Honda Civics Line Up for a Race, Turbo K20 Meets Boosted B18

Home > News > Auto Motorsport
Dragos Chitulescu
When I was growing up, I was a big-time Honda fanboy. There, I said it! In my first year of college, I became best friends with a Civic owner, and we used to drive to the local touge for some midnight testing. Soon after, I got to ride shotgun in all kinds of crazy Hondas, including turbocharged S2000s and various Type R models. Later on, getting behind the wheel of an EG6 blew my mind, even though I put less than 500 miles (804 km) on it.
12 photos

But these days, some people are ashamed to recognize that their automotive journey started in a Honda. Presumably, the whole "ricer phase" is something not everyone wants to remember. But deep down, you can't deny how cool sporty Hondas were and still are.

Just think of the '90s and 2000 line-up the Japanese manufacturer had. You could have bought an FWD vehicle like the Civic, Integra, or the Del-Sol. But there was also the option of an RWD sports car like the S2000 or the NSX.

And today, we're looking at a sort of a hybrid race. It may look like there are two Civics lined up for the battle, but there's more than meets the eye here. The 1994 Honda Civic EG uses a supercharged and stroked Integra GSR engine.

This one is using an engine that used to be under the hood of an Acura RSX Type S, so we are talking about a K20A2 unit as opposed to the EG's B18C1. But anyone who's ever seen an Acura RSX Type S or any kind of FWD Honda, for that matter, will notice that something's amiss.

The K20A2 has been mounted longitudinally, as this is an RWD-converted EK. Seeing that the owner is using a six-speed manual gearbox off of a Honda S2000, you would have expected him to use the F20C unit instead, right?

No stock K20A2 can go up against a boosted B18. So it has been fitted with a Garrett GT3071R turbo. With that in mind, this car is now up to 350-hp. So it's slightly less capable than its opponent today, especially considering that it's 300 lbs (136 kg) heavier.

The fact that it's running on 225 tires on the rear isn't very encouraging either. But the EG's rims are wrapped in Mickey Thompson slicks, and grip levels on the track are less than ideal. So this could be anyone's race at this point.

For the first run of the day, the finish line is exactly 1,000-ft (304 meters) away from the start. The EK is off to a rather sketchy start, as it struggles to keep going straight. Missing a gear doesn't exactly help either. But then, the unthinkable happens, and the older Civic gets left behind.

It seems that the EG was left with no boost right after the launch, as the belt slipped off of the supercharger. It does manage to make a strong comeback for the second run, and at this point, the two drivers are tied 1-1. We won't spoil the outcome of the third run for you, but let's just say that one of the two cars doesn't make it across the finish line. 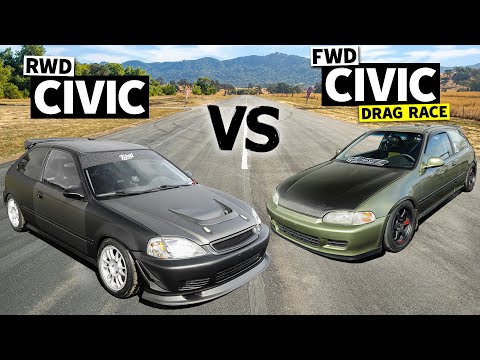