Home > News > Auto Motorsport
Vlad Mitrache
Those born in the last two decades might find it hard to, but there used to be a time when sedans ruled the world. Yes, before SUVs and crossovers took over, it was the three-box design that was pretty ubiquitous all around the world.
7 photos

With the two segments already mentioned munching on all the others' market share like a pair of hungry caterpillars, the glory days of the sedan seem to be behind us. However, no matter how strong people's love affair with the SUVs grows, there will always be some room left for cars like the Honda Accord or the Subaru Legacy. Hopefully.

In this 2.0T Sport trim, the Honda Accord is actually quite the sleeper. We've seen the Japanese model drag racing all sorts of cars it should have no business being anywhere near (think Camaros or Mustangs) and winning. With that in mind, does its opponent for the day even stand a chance?

Well, it's a Subaru, which right from the off means it has something the Accord lacks - an all-wheel-drive system. It also has a very similar power output (260 hp and 277 lb-ft/375 Nm compared to Honda's 252 hp and 273 lb-ft/370 Nm), albeit from a 2.4-liter turbocharged flat-four (as the name suggests, the Accord has a turbocharged 2.0-liter four-cylinder engine).

With slightly more power and AWD, it all seems to point toward a victory for the Scooby, but there are a few clinchers to consider. First of all, the Legacy has a continuously variable transmission (CVT), that horrible type of transmission a lot of Japanese brands insist on using. Yes, the GT does have a manual mode surrogate, yet anyone who's ever driven a CVT car will know these things simply aren't geared for performance.

Then there's the weight situation. That all-wheel-drive system of the Legacy GT might give it a better launch (more on that later), but it also puts on more timber. 3,779 lbs/1,714 kg, to be exact, which is over 400 lbs (nearly 200 kg) more than the Accord (3,356 lbs/1,522 kg). With no significant extra torque to help it, the added weight might turn out to be the GT's undoing - that is if the CVT doesn't get it first.

Finally, there's also a discussion to be had about the wheels and tires. The Accord has a set of steelies, which leads us to believe it might be on winter tires since a lot of people keep the alloys for their more performance-oriented summer rubbers). Sam, the host of the video, said it was still cold outside, so the presumed winter tires could be either an advantage or a hindrance depending on the exact temperature. The weight of the steel wheels definitely doesn't help, though.

We get to see two runs, one from a dig and the other from a roll. As is the unwritten rule in these drag racing videos, the classic standing start comes first, and it doesn't take a second to know which of the two will come out on top. The Legacy's AWD advantage quickly vanishes as the Scooby struggles to match the Accord's much better launch, with the Honda sedan making good use of its wonderful ten-speed automatic.

With that out of the way, the roll race is just a formality for the Accord, though I have to admit that after the first run, I was expecting a bigger gap. I guess not having to break the inertia of all that mass like it did from a standstill helped the Scooby a little, though not enough to save any face. I'm thinking about starting an online petition to ban CVTs, who's with me? 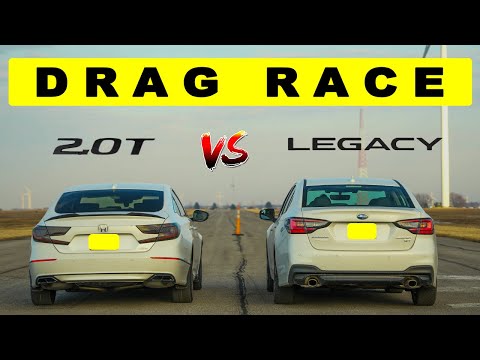