1 Lexus Presents the RZ 450e, Its Version for the Toyota bZ4X

Redesigned for the 2022 model year, the Civic Si comes exclusively as a four-door sedan with a six-speed manual that features rev-matching technology from the outgoing Civic Type R. Prospective customers who prefer a two-pedal setup will have to step up their budget because only the Civic Si-based Acura Integra is rocking that kind of transmission. A CVT, that is, completely defeating the purpose of a sporty car.
9 photos

The biggest problem with the Civic Si, however, is that U.S. customers are taken for fools. The Canadian specification boasts way more standard kit, and it’s also more affordable at 33,750 maple bucks or $26,975 at current exchange rates compared to 27,300 freedom eagles in the United States.

Given these circumstances, is the Toyota GR86 a better choice in this price bracket? Well, that depends on a few aspects, chief among which is practicality. If you can live without the rear doors, then go for it. The Subaru BRZ-twinned boxer sports car also happens to be more powerful than the Civic Si at 228 ponies from a free-breathing lump that displaces 2.4 liters.

Torque is relatively on par with the Honda, but the 184 pound-feet (250 Nm) of peak torque are delivered at 3,700 revolutions per minute. Lighter by quite a few pounds, the Toyota also happens to be far more exciting on a twisty road thanks to rear-wheel drive rather than front-wheel drive.

As for quarter-mile shenanigans, neither car has been designed to perform in this regard. Be that as it may, Throttle House decided to dig and roll race them just for the fun of it. Obviously enough, the GR86 wins both races. 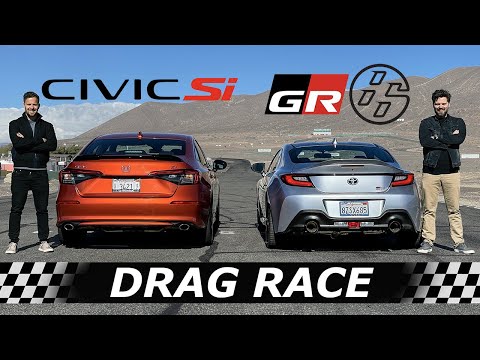