4 8s SRT8 Jeep Humiliates Camaro, Then Tries to “Climb” the Tree During Burnout

Essentially created by Dodge to fill the big void left by the Challenger Demon's retirement, the Hellcat Redeye has been around for enough time to prove its supercharged 6.2-liter V8 mettle against all sorts of opponents in stock form. So, how about a mix of confrontations after the 797-horsepower Challenger has visited the aftermarket realm?
45 photos

Although we’ve become accustomed to very short videos from the Drag Racing and Car Stuff YouTube channel, this time around, we’re treated to a longer quarter-mile racing festival. You know, just like that one time when a sensibly faster Ski-Doo snowmobile snatched our attention away from some run-of-the-mill confrontations between a Lexus GS F and the traditional S197 Ford Mustang or the exotic Mercedes-AMG GT rivals.

This time around, it’s mostly an all-out U.S. affair, as the feature has us completely focused on a dark blue (with a neat yellow spoiler lip) Dodge Challenger Hellcat Redeye as it seeks night- and day-time quarter-mile glory in the company of a series of challengers (pun intended).

We should have said Demons, but let’s get the disclaimer out of the way first. This Redeye features a series of upgrades in the form of bolt-on parts, but the D.R.A.C.S. folks don’t give us any details on the exact modifications, unfortunately.

They’re more than enough, though, to give the Redeye the edge in just about any scenario. We’re not going to rob anyone the pleasure of seeing the smoke shows, and the subsequent wins coming from this particularly enticing (and intriguing) Redeye; instead, we’ll just give you an ET hint.

This Challenger can dip below the 10-second threshold all day and night long, but a couple of runs also see it deliver great 9.35s and 9.36-second results.

As for the foes, it’s basically an automotive festival of both modern and classic encounters. We identified a couple of Demons, a Z06 Chevy Corvette (C7), a Charger seemingly coming after a Fox Body ‘Stang, the traditional S197 Ford Mustang, what looked like a blown Tri-Five, and even the GMC Typhoon oddball, among others. 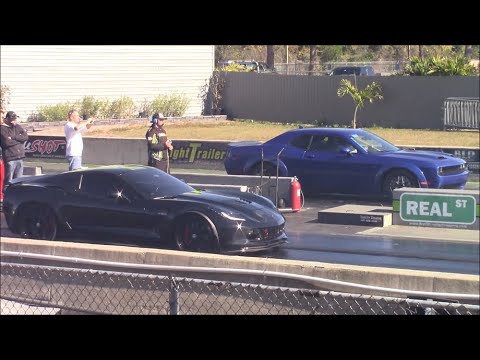