Bogdan Popa
Trying all kinds of crazy stunts in Grand Theft Auto V is something many people eventually ended up doing, and at some level, this is what actually helped keep this super-old title alive.
17 photos

Because after all, GTA V was released no less than 8 years ago, and judging from all the reports online, Rockstar isn’t necessarily in a rush to release its successor.

The stunts, however, along with mods and the custom content available online, have all made GTA V the super-popular game that it still is today. So if you’re into GTA V stunts, here’s something that looks incredibly challenging: GTA-inspired stunts in Forza Horizon 5.

The new Forza is without a doubt an awesome title from pretty much any regard, but those who want to experience a different side of the game can do what YouTuber Hazardous did recently: visit the Event Lab and try some GTA-inspired stunts in Forza Horizon 5.

If you’ve played GTA V before and done this sort of thing, the experience will somehow feel familiar. But on the other hand, as you can see in the video below, the game mechanics, the handling, and pretty much everything else makes even the simplest stunt a lot more challenging, and in many regards, pretty fun.

However, it’s pretty clear that GTA V-themed stunts in Forza Horizon 5 aren’t for the faint of heart. And if you lose your patience fast, you’d better not try it because it takes a while to master the art of stunts in FH5.

At the end of the day, this video is living proof that Forza Horizon 5 isn’t just a typical racing game. The map builder and the custom community challenges turn it into a title that’ll probably feel fresh for a very long time, pretty much just like GTA V is still such an exciting game after so many years. 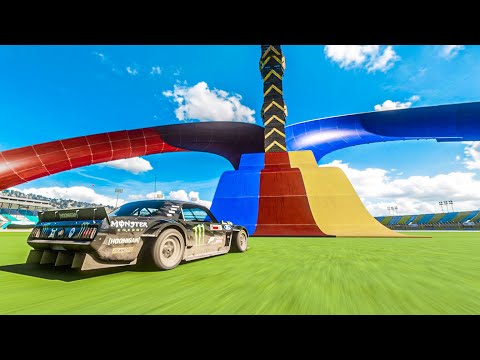