1 This Old Single Cylinder JAWA Motor Gets a New Shot at Life, Shines Like New

4 Old-School-Looking Speedometer Is, in Fact, Among the Smartest, Feature-Rich Bike Cockpits

5 Think About These Regular Service Items Before Buying a Used Motorcycle
Car video reviews:
Up Next

Getting eBay Fairings for Your Motorcycle Might Be Worth It, They Require Work

If you are a motorcyclist and want to take your sports bike on the track, you should know that crashing will result in cracked or broken fairings, which will be expensive. Even if that is the worst damage endured, it will still be pricey. So, to avoid risking expensive fairings, getting aftermarket ones is the way to go.
7 photos

As you can imagine, aftermarket fairings for motorcycles are not exactly free either, but at least they are cheaper than a set of new ones for your bike. If you happen to own an older model sport bike, which has not been made for many years now, you have better get used to the idea of not being able to buy new fairings for it. Second-hand or aftermarket will be the way to go.

If you are wise in your approach to track days with motorcycles, you probably already arrange to transport yours with a van or on a pick-up truck's bed to the track and back. This is done to ensure that you do not ride on racing tires on public roads, but also to prevent you from crashing your bike on the way to the track or on your way home.

The latter is a risk that few people talk about, but it is there because you will be tired after a day on the track. In reality, your concentration level will not be as high as it was on the track, despite having more risk factors around you.

Dave, the host of Canyon Chasers on YouTube, is documenting the build of a track bike based on a KTM 390. While his favorite suppliers for aftermarket fairings do not supply products for the KTM 390 RC, he decided to test the quality of aftermarket fairings found on eBay.

He contacted a supplier from Thailand, who makes fiberglass fairings for the KTM RC, and eventually ordered a set to check it out. As you can observe, it takes a bit of effort to install, as it is not entirely bolt-on, but it will do the job.

If you cannot afford to buy aftermarket fairings for your motorcycle, try getting used ones with minor faults (such as cracks) and have them repaired by a local fiberglass specialist. The alternative is to have a set made with molds from your bike's fairings, which will be lighter and ensure a proper fit, although they might cost a bit more than repairing cracked used fairings. 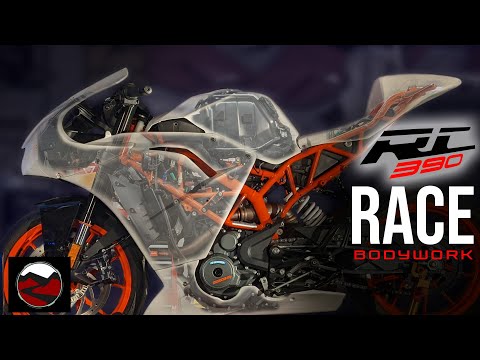