Some time ago, autoevolution featured a piece about taking a two-person moped and transforming it into something dubbed Futuristic Motorcycle. This is article is all about where things eventually went.

We recently posted an article about a YouTube channel named Meanwhile in the Garage that took a two-seater moped and transformed it into something else entirely, Futuristic Motorcycle. If you missed that article, I've added a video below that shows you exactly what I'm talking about.

Aside from being a rather top-heavy vehicle, stability issues proved to be troublesome, and "training wheels" had to be included just to keep it from tipping over while turning.

Well, this time around, Meanwhile in the Garage is back and better than ever. Why? Well, they've taken their previous project and fixed any stability issues that may have existed. By dropping a two-wheel construction to the front, the need for those training wheels is no longer necessary. The process also grants this machine extraordinary handling capabilities for a garage-built vehicle, that is.

Now, if you're familiar with Meanwhile in the Garage's works, all of what you'll be witnessing happens in, well, a garage. This time around, everything starts with a banged-up ATV, and good thing it is junk because the only component needed will be the front suspension.

Once mounted onto a support, the craftsman goes to town disassembling the suspension. That aside, it's time to bring in the motorcycle and remove its front suspension.

From here, it's time to figure out how to add two wheels to a place where there would typically be just one. Well, this requires modifying the front of the ride to eventually add a double-wishbone suspension.

Once the suspension and wheels are mounted to the front, the host realizes that a bit more structural reinforcement is needed, so back to drilling, cutting, welding, and all that jazz.

Part of the construction you're witnessing from minute 13 and on-ward is figuring out how to include a new steering column and attach it to control the wheels correctly.

Now, suppose you remember how the motorcycle is steered. In that case, you recall that the handlebars aren't horizontal like they'd normally be on a bike but rather turned to point downward, positioning your hands very much like they'd be on a steering wheel.

With more cutting, drilling, lining up, and eventual welding, the wheels are connected to the steering column. Final touches include adding a makeshift grill for protecting components to the front and adding a windshield wiper.

Once all that's done, it's time to take everything apart again, add lubricants, and back to the final assembly process. Knowing everything is lined up correctly, no issues seem to arise. That's why you measure twice and cut once.

Almost done now. One thing I'd like to point out in the process is the joy on the host's face where he finally removes those training wheels initially used by the ride. With liquids added and the battery connected, it's time for testing.

Right from the get-go, you can tell that something is just so right about what this crew was able to put together. The initial takeoff from a backyard requires that the vehicle take a couple of small turns and even ride up a ramp to finally reach the streets; it did it all like a champ.

Once the testing grounds were reached, everything was let loose, and this backyard project shows everyone just what's possible with time and some ingenuity. If you ask me, this futuristic three-wheeler even has the potential to start a minor cult. Heck, I may have just found my next DIY project for this year. 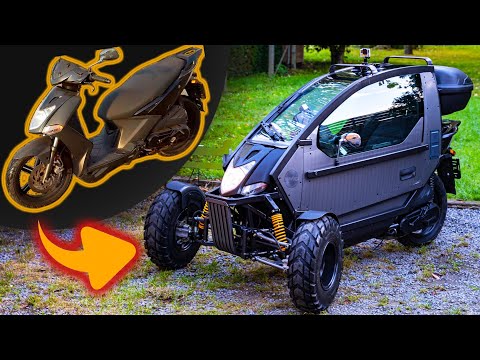 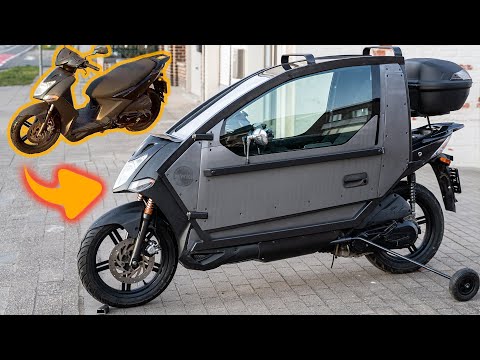