1 Tesla Model S Drag Races McLaren 650S, It's All About the Prepped Surface

Aurel Niculescu
Many people forgive Elon Musk for his exaggerations because of one important achievement. He did manage to demonstrate via Tesla and its models that electric vehicles are not just a curiosity. Now, the message isn’t taken everywhere by Musk himself - the fan base and the cars take care of spreading the word to the far corners of the Earth.
42 photos

On this occasion, the EV notification has reached Turkey, where Emir Tunçyürek is running E-Garaj, a little business trying to push the local market towards electrification. And what better way to demonstrate the perks of e-mobility than setting up a classic drag racing challenge?

It’s probably done with some help from the Tesla owner community – as far as we can understand (we don’t speak Turkish, but luckily the video embedded below has closed captioning in English). One thing is clear: the eclectic assembly comes from everyone bringing their personal rides (including Emir).

As far as the lonely Model X P90D is concerned, this one is from 2016. So, judging by their known abilities, we have a clear winner – at least on paper. By the way, the race has been set for both the quarter-mile and 1,000-meter (0.62-mile) markers because it takes place on an airport strip.

The setup looks a bit improvised, as shown by the impromptu visit of a landing airplane at the 1:20 mark that nobody was expecting. Still, you should take our word for it: the results aren’t set in stone from the get-go. We are not going to spoil the fun of watching the race unfold but be warned – the human factor plays a key role in setting up the victories. 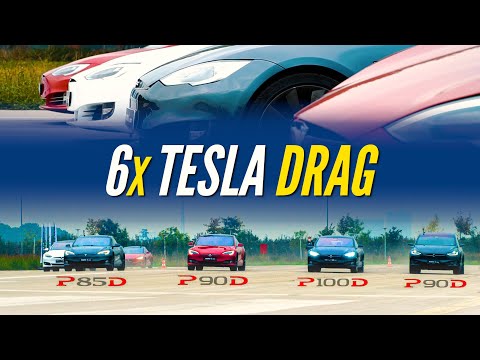