4 SpaceX Will Have People Living in Glass Domes on Mars, Before Terraforming

Elon Musk Has Moved to Texas Because California Is Too “Complacent”

Elena Gorgan
Earlier this year, during what has come to be known as the first round of lockdowns around the world, Tesla CEO Elon Musk spoke his mind unapologetically. Among other things, he said in no uncertain terms that he would be moving the Fremont Tesla facility out of California if local authorities insisted they shut down operations temporarily.
1 photo
Musk never had the chance to deliver on the threat, as Tesla was eventually allowed to reopen. But the open dispute was probably the proverbial straw that broke the camel’s back. Elon Musk has left sunny California for Texas.

Rumors about his move have been around for a couple of weeks now, and the Tesla CEO just confirmed them in an interview with Matt Murray for the WSJ CEO Council Summit, on the topic of innovation. You can see the full half-hour chat in the video below, with Musk’s answer about moving out of Cali highlighted in the CNBC video report right underneath.

Right off the bat, Musk talks about his frustration with rules and regulations and the increased bureaucracy that stifles all attempts at innovation. He singles out California and says that it’s grown “complacent” in recent years in terms of innovation, notes that his Tesla and SpaceX are the last major auto and aerospace companies left in the state, and hints that this could have played a part in his decision to move.

That said, it wasn’t just that that got him packing. Musk admits that, right now, it makes more sense for him to be in Texas than anywhere else. A new Gigafactory is being built in Austin, Texas, and SpaceX has major operations in the state as well. Musk says he plans to divide his time between Texas and Berlin, Germany, where Tesla is currently building the first European Gigafactory.

In the same interview, Musk says company leaders should focus more on delivering quality products and customer service than on profits (profit is just a bonus, progress should be the real incentive, he says), and spend more time meeting with real people instead of in board meetings. As for the government, the best thing it can do right now is just back off, Musk believes. 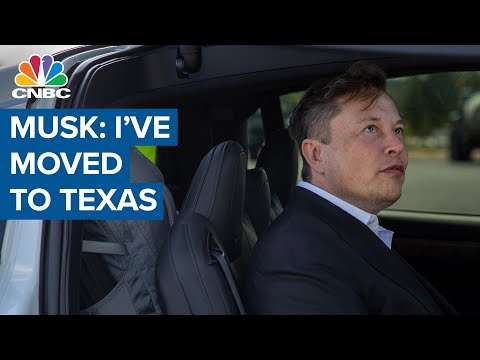