With the SF90 Stradale being Ferrari’s most powerful production-series model at the time of release, it was just a matter of time before the Prancing Horse lifted the top off its plug-in hybrid machine to create... its first-ever electrified model with a retractable hard top (aka RHT).
11 photos

That time is now, as the Maranello-based Italian supercar manufacturer has lifted (pun intended) the virtual curtain off the brand new SF90 Spider for the official (online) presentation of the first pictures and (juicy) details.

Ferrari isn’t beating around the bush by calling the new model anything else than it really is – the “spider version of the SF90 Stradale” has been aptly dubbed as the SF90 Spider, packing just about the same PHEV credentials as the coupe sibling, complete with the 1,000 ps (986 hp / 735 kW) powertrain.

It’s the company’s first production-series plug-in hybrid vehicle, with everything “engineered to melt the driver and car together: two bodies, one soul, to discover the ultimate essence of pure driving emotion. It’s an experience you will never forget,” according to Emanuele Carando, the brand’s marketing head honcho.

As such, the new RHT allows for the customary open-air experience in 14 seconds, even while on the move. Those who fear there would be any performance loss attributed to the changes necessary for the droptop configuration, need not worry, because Ferrari diligently upgraded the RHT to be 40 kg (88 lbs.) lighter than a conventional assembly.

The top also occupies just 100 liters (3.53 cu. ft.) of space, releasing additional cargo space for those extra-long shopping days. As far as other benchmarks are concerned, it’s where the Assetto Fiorano pack comes into play, ensuring there’s 390 kg (860 lbs.) of downforce at 250 kph (155 kph), while the car is 21 kg (46 lbs.) lighter than stock. 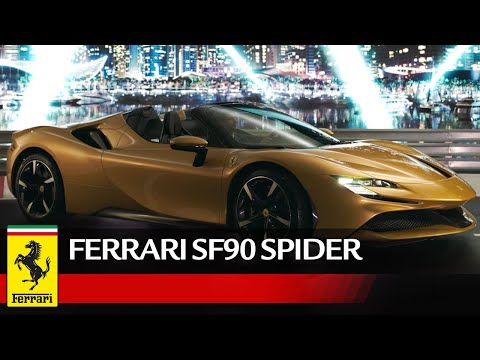