2 Cadillac DeVille Wants to Make the Wagon Great Again, Does It Have Your Support?

3 Doug DeMuro Reviews 2022 Nissan Pathfinder, Is Impressed but Would Still Rather Have a Kia

5 Doug DeMuro Reviews the Koenigsegg Regera, Is Almost Scared of Its 1,500 HP
Car video reviews:
Up Next

Here’s a little something that might make you feel proud to be an American on July 4th: an American car, designed by an American for an American comedian and actor – the TAD Cadillac DeVille DTSi, where TAD stands for Tim Allen Design.
8 photos

Under the hood, you would have found GM’s 4.6-liter Northstar V8 unit, modified to produce roughly 400 horsepower, instead of its usual 300 hp. Cadillac did this without using any turbocharging or supercharging, which is fine, although the four-speed 4T80 automatic gearbox wasn’t exactly in-tune with the extra power.

Allen reportedly also considered other cars instead of the DeVille, like the Oldsmobile Aurora or the Lexus IS 300, but in the end, he settled on Cadillac’s two-tone beast, which ended up getting custom pistons and a 12.0 to 1 compression ratio, resulting in that extra 98 horsepower.

The result was a better-looking car, simply put. Compared to a regular DeVille DTSi, this TAD variant looks more planted, more expensive and overall, more dynamic. It’s by no means a “driver’s car”, as Doug DeMuro recently found out, but it’s definitely better to drive than any lesser DeVille.

DeMuro concluded his review by saying just how special he considered this car to be and went as far as to confess that he’d like to purchase one, seen as how they’re extremely rare/exclusive.

We get why he’d want one. A rare car is a cool car, by most people’s definition. On top of that, the DeVille is mighty comfortable to cruise around in, so it should be relaxing to drive too. 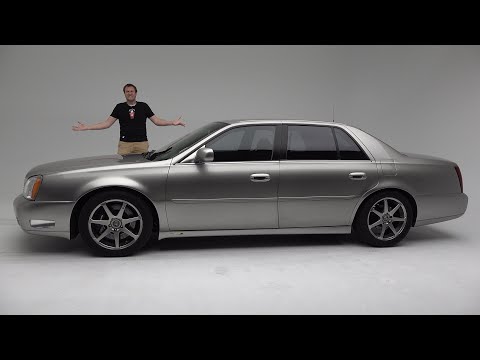