Doug DeMuro Drives the 2023 Cadillac Escalade-V, Ranks It Below a Certain Other Fast SUV

Cadillac unveiled the Escalade-V back in May of this year, bragging about how it’s the “industry’s most powerful full-size SUV.” However, when it comes to performance, power isn’t everything and the Escalade-V is certainly not as quick to 60 mph as some of its rivals.
8 photos

Regardless, if you’re in the market for a luxury SUV that can hold seven individuals and accelerate like a bat out of hell, you really can’t go wrong with the Escalade-V, as long as you don’t mind the sticker price – it retails from $149,990, which means it’s more expensive than an AMG-powered Mercedes GLS or even a Tesla Model X Plaid.

Now, if you want to get to 60 mph as fast as possible, you’ll definitely want the Model X Plaid over the Escalade-V. Same goes for the flagship spec Hummer EV SUV or the slightly smaller Rivian R1S, but you’d be trading in some of that luxury too, which is something most buyers won’t be OK with.

Anyway, what makes the Escalade-V tick is a supercharged 6.2-liter V8 engine, producing a total of 682 hp and 653 lb-ft (885 Nm) of torque, with everything going to the wheels via a 10-speed automatic transmission. It will get you to 60 mph (97 kph) in 4.4 seconds, which is more than respectable.

As for Doug DeMuro’s take on this flagship Caddy, well, he was actually quite impressed by it, especially the versatility. It’s fast, it sounds great, it’s luxurious, modern, safe, you name it – it's a great overall package. But again, the issue is pricing, and while most Escalade customers probably won’t even bother looking at alternatives, regular car enthusiasts certainly will.

For example, if you don’t need all that size and you don't want something electric, just go with a Grand Cherokee Trackhawk or a Durango SRT Hellcat, both of which should put the Escalade-V to shame in terms of straight-line acceleration. In fact, DeMuro even gave the Durango Hellcat a higher overall DougScore. 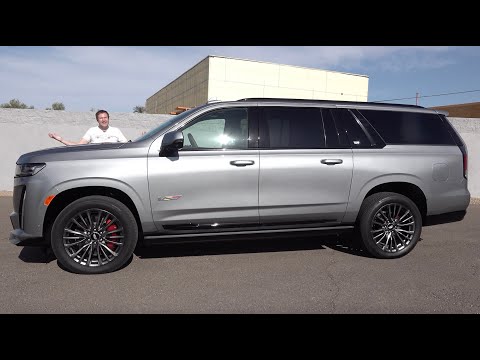