The Escalade was available in two body lengths, and the top-of-the-line ESV was the most expensive and the most luxurious from its lineup.

While other carmakers had their flagships as limousines, Cadillac's top vehicle was the Escalade. Even though it was built on the same platform as a workhorse pickup, its luxurious interior and exterior design made it a flagship like no other.

With a front fascia that could be mistaken for a brick-wall, the 2021 Escalade was a commanding appearance on the road. Its broad grille sported the big Cadillac's shield badge. Its narrow LED headlights were positioned on a higher position, on the sides, flanking the grille. The carmaker installed the daytime running lights on the bumper's outer sides arranged as vertical strips in scoops. Unlike its smaller sibling, the regular Escalade, the ESV featured a longer bodywork and wheelbase. To conceal the added length, the designers installed an additional glass area between the rear doors and the last row of windows.

Inside, the carmaker installed a curved OLED screen at the front, which included the instrument panel in a distinct area in front of the driver. For the rear-seat entertainment, Cadillac installed additional screens behind the front seat headrests. It was available with either a captain-seat second row or a bench, while the third row was wide enough to accommodate three people. While the regular Escalade offered adequate room for the last-row passengers, the carmaker offered plenty of trunk with all the seats up in the ESV version. With the second and third-row folded, it offered.

Under the hood, Cadillac installed a choice of two engines: a 6.2-liter V-8 and a 3.0-liter turbodiesel inline-six. Both were paired to a ten-speed automatic transmission and available with rear- or all-wheel-drive. 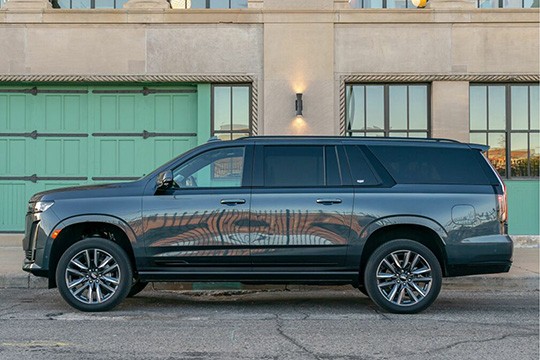 4 Cadillac Celestiq MSRP To Be Higher Than That of a Bentley Flying Spur, Bling Is Costly