1 Doug DeMuro Drives the 2023 Cadillac Escalade-V, Ranks It Below a Certain Other Fast SUV

5 Genesis GV60 Promises to Be the Best E-GMP Product So Far
Car video reviews:
Up Next

Genesis is Hyundai's more luxurious brand, and it tries to compete with other premium carmakers on the market, but it has to work harder than anyone else.
8 photos

Burning the midnight oil seems to be something familiar for Genesis' R&D department. While other premium brands don't have to scream that they are premium, Genesis does. This Korean brand didn't exist when other premium carmakers were already reckoned on the market. That's why it had to work harder than anyone else. While some might think that it came too late on the market, Genesis' management considered that there is room for it as long as the brand has something special to offer.

For starters, the GV60 is based on the same platform as the Hyundai Ioniq5 and 6 or the KIA EV6. But the exterior design doesn't look like a simple badge-engineered product. Instead, this compact EV crossover showed a completely different exterior. It boasted a crossover-coupe shape, with a sloped rear end adorned with a big spoiler between the glass and metal areas on the tailgate. Moreover, it has some specific features that are unavailable for GV60's mundane siblings.

Hyundai-KIA introduced the face-recognition sensor on the B-pillar and a fingerprint reader on the driver's door handle. Thus, the owner can lock or unlock the vehicle even if they don't have the key in their pocket. Once inside the vehicle, they can start the car by touching the fingerprint sensor on the center console, just like unlocking a phone with a finger.

Inside, DeMuro is satisfied by the high level of material quality. Moreover, the door cards are covered in a material that evokes a luxurious feeling for the occupants. Doug noticed an unusual feature: the center console that separated the front seat sported a pass-through area at the bottom. We might imagine that an umbrella could fit there. Something you couldn't find in a fourth-generation Corvette, though.

But it was the rear seats that surprised DeMuro. Despite the car's size, the GV60 provided enough room for three passengers. Obviously, the split-folding bench could expand the trunk's size, although they could have been folded only from the salon area, not from the back. Speaking of the trunk, the GV60 offered an ingenious solution. Its floor left a technical compartment where the tire-repair kit was hosted. Moreover, the floor's panel could have been opened on a side, offering access to a side compartment where the owner could store some stuff they didn't want to show. In addition, the carmaker installed a "frunk" that the owner could use for small items.

Last but not least, driving the GV60 impressed DeMuro. Not only because it does 0-60 in 3.4 seconds. He considers this something normal for most electric sedans and hatchbacks. But this vehicle is a crossover. And, despite its aerodynamic shape, it is still a tall vehicle with a big frontal area. Also, he noticed that while the GV60 might be fast on a straight line, its higher ground clearance and overall weight don't qualify the Korean crossover as a sport vehicle. After all, other premium carmakers have more than a century of experience on the market. But Genesis is closing the gap. Remember: some people laughed at Lexus too. 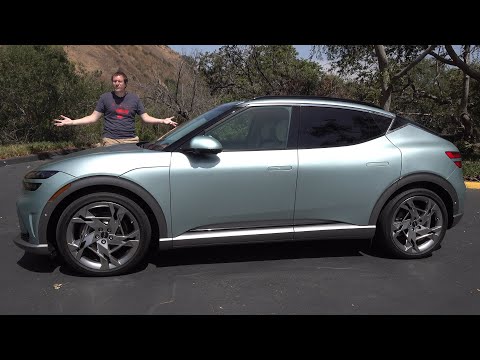