Dodge should have retired the Charger a long time ago, considering that it has recently turned 11 years old. However, that’s not an option, not yet at least, as the Hellcat era will reportedly end in 2023, so until that happens, they will keep updating it.
7 photos

Recently, the American company has introduced the Jailbreak package, with enhanced personalization options and even more oomph, boosted from 797 hp to 807 in the Redeye Widebody variants of the Charger and Challenger.

Boasting straight-line performance on par with some previous-generation supercars, the Dodge Charger SRT Hellcat can give many fast vehicles a black eye down the quarter mile, but is the Tesla Model 3 one of them? You might be tempted to say yes, and you wouldn’t be wrong, if we were talking about the normal variants.

Nonetheless, this one appears to be a Model 3 Performance, meaning that it can hit the 62 mph (100 kph) mark in just under 3.5 seconds too. It may be short on power compared to its ad-hoc rival, as its dual-motor setup generates ‘only’ 450 horsepower and 472 pound-feet (640 Nm) of torque. Still, the instant thrust available via the right pedal should be enough to help it put the big bad Charger SRT Hellcat in its corner, especially if the ICE-powered vehicle ends up struggling for grip during launch. 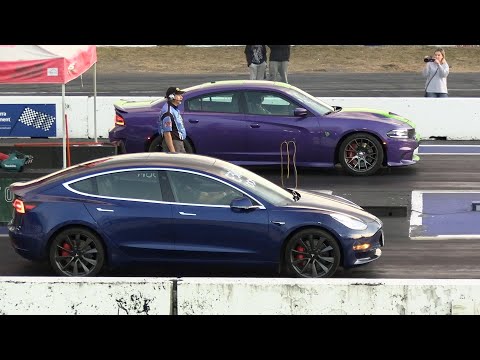