We know that the Tesla Model 3 Performance is amazing at many things, including drag racing. It even showed the BMW M3 a thing or two. But does a much bigger V8 mean the new Audi RS6 Avant is that much better than an RS4 and thus a match for this electric family dragster?
10 photos

To find out, Carwow organized a drag race between Mat Watson's long-term RS6 tester, featuring a questionable shade of green, and some random Model 3 dual-motor EV. The conditions are less than ideal, and we know some readers are going to dispute the outcome of the races, so we'll just tell it the way we see things.

The first race sees the RS6 in the lead because of Mat's quicker reaction times. And in the second one, the two cars are basically even across the finish line. The tie-breaker, the Audi pulls off a little bit quicker because it has launch control, but the Model 3 gains some ground whenever the RS6 has to shift gears. Eventually, the internal combustion engine has more grunt because of the higher speed. But we'd call that a victory for Tesla. Maybe at a real drag strip with dry conditions, it would have won.

We are comparing an Audi that's more than twice the price and has something like 110 horsepower of extra shoving power. And you'd have to go pretty fast to lose a drag race in a Model 3 in the real world... not that you should race on public roads anyway. It's also amazing how an EV is now significantly lighter too.

Yeah, we know they're not from the same class, but it's not like you're losing a lot of practicality here, since the cabin of the Tesla feels just as airy. That being said, the RS6 maybe has more curb appeal thanks to its naughty body kit. 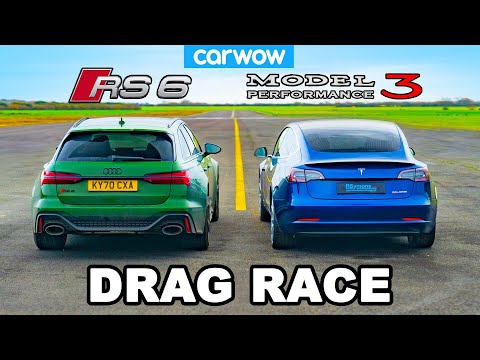