Stellantis has officially confirmed that the future of its muscle car is electric. However, until that happens, we can still enjoy the multitude of Dodge Challengers, the best of which boast supercar-rivaling power without any mods.
11 photos

Throw in a few oily bits, modify others, and you will get a ride that has more power than the original Bugatti Veyron, which exceeded the 1,000 HP mark.

But what if you don’t want to go fast in a straight line and would rather go for something that turns heads? Well, then a set of aftermarket wheels could do the trick. And if you feel like aiming for the sky, then nothing beats the oversized offering.

Take this Dodge Challenger, for instance, with Texas license plates, which was filmed at a car event in the U.S. of A., attracting a lot of looks due to those huge alloys.

The video description states that they are no less than 32 inches in diameter, so they did require plenty of work to be fitted. The wheels have a floater design, and since there wasn’t that much room left under the arches, they were shod in very thin rubber.

The chameleon paint job reminds of something that was popular in the mid-‘90s, early-2000s, but it is nonetheless present. Privacy windows all around keep curious eyes from catching a glimpse of the cockpit, until opening the door and seeing that it has custom cards too.

The backseat is no longer in place, as instead, the owner of this tuned muscle car chose to install a serious aftermarket audio system. And by the looks of it, it is still a work-in-progress, because the cabin needs a bit of love before it will be finished.

So, what’s your opinion on this Challenger? Is it a yay or a nay? 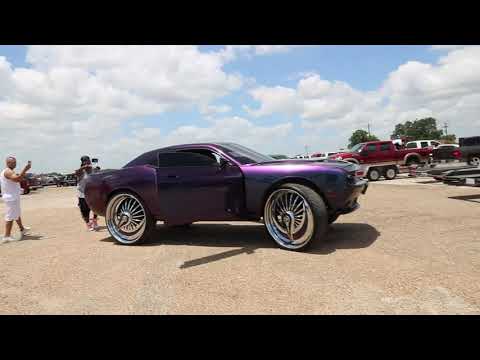