2 Classic Honda CB750 Gets an Understated Makeover, “The Mighty Four” Is Born

5 Honda Redesigns Its Iconic CRF250R Motocross Bike, Boosts Its Power and Speed
Up Next

Mircea Panait
The Civic Type R hasn’t changed much since the EK9 that was based on the sixth-generation Civic. The FK2 based on the ninth gen is arguably the biggest departure from the original thanks to forced induction, and the 2022 model year Type R isn’t going to change this formula either.
31 photos

Back in November 2020 when the all-new Civic was introduced to the world on Twitch of all places, product planning head Gary Robinson made it clear than a six-speed manual is on the horizon. Western Region media relations manager Carl Pulley followed up in May 2021 by highlighting a manual-only setup, which brings us to the following eight-minute upload from Carwow.

Titled “New Honda Civic Type R - will it be a AWD 400hp hybrid?!,” this video brings an old rumor back from the dead without regard to the developments from the past year. Can you imagine a manual tranny and hybrid assistance in anything other than an old Insight or CR-Z? I certainly can’t, especially a powertrain that includes a rear-axle drive unit. The e:HEV setup in the Jazz and CR-V for the European Union is off the table as well because the two-motor hybrid system is only offered with Atkinson-cycle aspirated engines.

Oh, and speaking of which, a representative at American Honda Motor Co. has also confirmed to American outlet Car & Driver that all-wheel drive isn’t coming to the eleventh-generation Civic back in November. That would be that, or as Loosa Bway sums up the speculative video in YouTube’s comments section, “didn’t he used to do car tests rather than time-wasting clickbait?”

Carwow presenter Mat Watson takes until the 5:20 mark to answer the question in the video’s title, which brings us to the Betteridge's law of headlines. More to the point, British journalist Ian Betteridge says that any headline that ends in a question mark can be answered by the word no.

That said, it’s inevitable that the all-new Type R will feature the same 2.0-liter turbocharged four-cylinder engine as the FK8, albeit with more oomph. 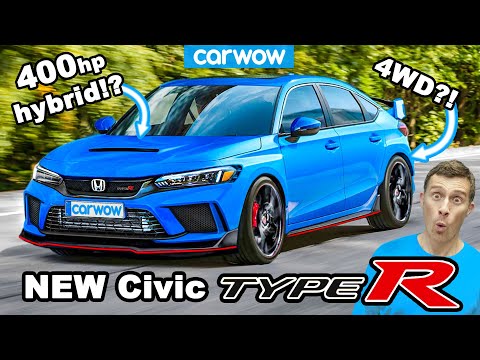