3 EVE Online Receives Its Biggest Update to Mining and Industry, Take a Look at the Changes

4 Explore the Strangest Star System Yet in EVERSPACE 2 Universe

5 Pilot a Sentient Starfighter in Dark Space Shooter Chorus, Coming Soon to PC and Consoles
Up Next

1962 Chevrolet Corvette Has a Mysterious Drag Racing Past, It's a Sad Sight

Chorus Latest Gameplay Trailer Is All About Space Drifting and Dogfighting

Home > News > Videogames
Cosmin Vasile
Chorus is a sci-fi action-adventure game where players pilot a sentient starfighter and engage in zero-g combat. Developed by FISHLABS, the studio behind the Galaxy on Fire series, Chorus is set for release on PC, PlayStation 4/5, Xbox One, and Xbox Series X/S on December 3.
6 photos

Despite being a space combat game first, we are being promised “a compelling single-player experience” and an exciting story to complement Chorus’ gameplay mechanics.

With a bit more than a week until the game’s launch, IGN published an 8-minute exclusive gameplay trailer that shows in-depth combat action. We also get a closer look at the Forsaken, the sentient spaceship players will get to pilot in Chorus and one of the game’s main protagonists.

For those who are into space combat games, Chorus feels like a solid option. Although it’s closer to an arcade rather than a simulation game, the maneuverability is very smooth, and the controls seem tight enough.

We noticed in some scenes that developers have tried to replicate space physics, so ships won’t stop suddenly when thrusters disengage. The very cool effect makes it feel like you’re literally drifting in space to dodge projectiles and lasers.

From what we’ve seen in the gameplay trailer, Chorus looks very much like Everspace 2, although the space seems a bit lighter in the video.

The game features exploration elements as side content, along with character progression, and upgrades system. The video also shows some of the loot that drops from enemies you kill in space, but the fitting of the ship probably happens in your “base.”

The ship’s weapon system is quite varied, each class suited to different purposes. To unlock and upgrade Forsaken’s tryptic of high-tech sci-fi weapon classes, players will have to travel to parts of the universe that they wouldn’t normally explore if they’d strictly follow the main story.

There’s not much else to say about Chorus other than the fact that both visuals and combat look quite impressive. Obviously, you’re not going to play this for the story, but a compelling narrative would definitely be a nice bonus. 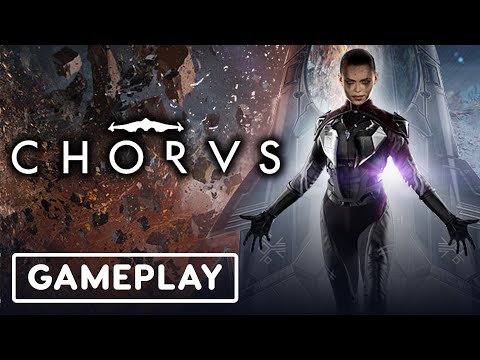