Fiat Would be Working on Its Next Abarth: It May Be Based on the Pulse

Explore the Strangest Star System Yet in EVERSPACE 2 Universe

Cosmin Vasile
It’s hard to compare EVERSPACE 2 with any of the modern open-world universe games. Still, if I had to pick a title akin to Rockfish’s project, it’s probably going to be Freelancer, one of my favorite space flight sim games. Still, there’s a little bit of Wing Commander in there too.
10 photos

EVERSPACE 2 is still a work in progress, but there’s enough content available right now to make it worth your time. And with the latest update released today, the game is about 2/3 complete, an important milestone considering EVERSPACE 2 is scheduled for release in early 2022.

Hot off their EVERSPACE 2 launch on Xbox Game Pass for PC, the folks at Rockfish Games have released Khaït Nebula: Stranger Skies, the third, major Early Access update for the spacefaring looter shooter.

Apparently, the Khaït Nebula is the strangest star system introduced in the game to date. Although the entire EVERSPACE 2 is filled with mysteries, this particular star system ups the notch even more, so players exploring the new region will find strange artifacts, bizarre creatures, and hints about the history of the precursor race known as The Ancients.

EVERSPACE 2 is a story-driven space-shooter with RPG elements, and the newest update picks up where the last update’s story left off. Khaït Nebula: Stranger Skies introduces a new faction, The Redeemers, a cult of researchers turned to the worship of The Ancients, as well as new alien life forms and another companion. Also, players will gain access to a new player ship class, perks, puzzles, and more.

The new Vindicator Heavy Fighter type ship class stands out thanks to its high mobility and focus on using drones to deal damage. The Vindicator’s drone focus is supported by its expertise and abilities, increasing drone hull hit points, synchronizing attacks, and repairing or building new drones from destroyed enemies.

Although this isn’t the last update before the final build, Rockfish revealed that the next update scheduled for spring will feature another star system, but no additional story content as the remaining third of the campaign is being saved for the full release. 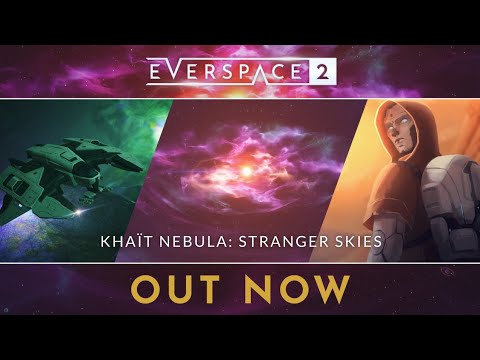