2 LR Defender, McLaren P1 and BMW i8 Rendered as the NASCAR Racers That Never Were

Home > News > Renderings
Aurel Niculescu
It’s been a while since Chevrolet outed the eighth generation of “America’s sports car.” Still, it turns out the mid-engine iteration is so popular that it never ceases to generate hype. As such, it doesn’t matter that some arrive late at the party because the rave hasn’t slowed down for a second.
29 photos

Not long now, and the C8 Corvette will be wrapping up (probably with a big bowtie) its sophomore model year, and it seems that people never cease to amaze us with their own jabs at making the spectacular Chevy their own. As always, some of the most prolific artists to use the C8 as a mid-engine canvas are the CGI masters.

Case in point with a digital guru known only by his social media alias hycade, who has once more proven his knack for extreme widebody makeovers, properly dubbing his version of the C8 the “Hypervette” to signal the entry attempt into the superior hypercar category.

While many artists usually present their work from an angle or two, this time around, the pixel master went totally next level, not just with the car project but also with the presentation. As such, the video embedded below presents the computer-animated Hypervette from just about every exterior angle and in a trio of different colors.

While initially we take a look at a subtle all-black widebody C8, next up come the white and blue versions to put all the details into perspective. And there’s an abundance of interesting facts.

Starting from the extreme aerodynamics this Corvette would have if ever to become real to the way its Stingray heritage is expanded so that the logo becomes an integral part of the aero works (you can see it up top, connecting the huge engine intakes and the spectacular wing).

Our own highlights (unfortunately, there are no interior views, so we can’t judge the cockpit as well) include the stacked quad exhaust setup in the rear, along with the extended LED taillights that are now connected. We’d totally love to see those appear for real on the car once Chevy comes out with the mid-life cycle facelift. 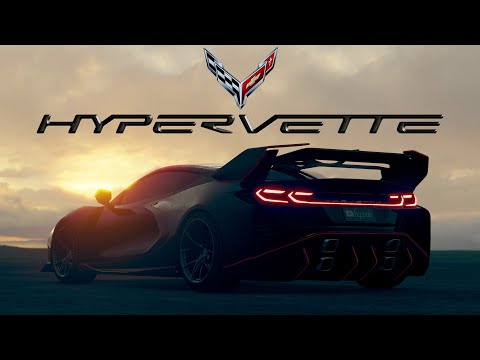