3 David Beckham Did His Own Stunts for Maserati Short Film

Canelo Alvarez Giving a Tour of His Car Collection Is Priceless, Inspiring

Saul “Canelo” Alvarez, or Canelo for short, is the best currently active boxer in the world and a multi-millionaire living the grand life, but you wouldn’t be able to tell by hearing him speak about the stuff he has.
12 photos

Like most public figures, Canelo does show off on social media every once in a while. That said, by comparison, his posts are almost “tame,” in that he doesn’t come across as too thirsty or too in-your-face about being able to buy multi-million cars on a whim. You get the same vibe from the video below, which marks a rare occasion when Canelo agrees to throw open his mansion doors to show the riches inside.

It happened for a very special episode of In Depth with Graham Bensinger, with Bensinger invited to Canelo’s mansion in Guadalajara, Mexico. Right off the bat, the boxer says that the only reason he agreed to shoot the segment is to inspire others to do more with themselves and, more importantly, pursue their dreams.

He, for one, started out selling ice cream on the city streets. It was also then, as a kid, that he saw a Ferrari Testarossa in a film and could only dream of owning one someday. He eventually bought one, perhaps as a present to that little kid inside, but he admits he “never drives it.” Instead, he would rather drive his Tesla Model X and, when he’s out in public in a more formal capacity, he will use a chauffeured Rolls-Royce because “it’s so elegant.”

For a celebrity car collection tour, this is a very surprising one. The camera pans over a Lamborghini, a Shelby Mustang, a couple of G-Wagons, and several motorcycles, including Harleys and Ducatis, but Canelo doesn’t say much about them. He does have a story about doing 200 mph (322 kph) on a motorcycle, but he doesn’t say which it is, and the camera doesn’t show it.

Instead, he speaks at length about his titles and belts, all of them framed and hung on the wall in the same room, including how someone is in charge of taking them off at night because they’re too heavy and might fall off. He is clearly a man who has worked hard for his success and enjoys every second of the results of that hard work.

A very cute and funny moment occurs when Canelo says he loves his Tesla because “it can dance” and then spends several minutes and plenty of frustration trying to get it to do so after it was brought outside in the driveway. One of the guys who handle his cars (they’re also friends) is finally able to get the code right, and the boxer just stands there, looking on in awe.

If your day was lacking some proper motivation, this Canelo video could probably deliver it. 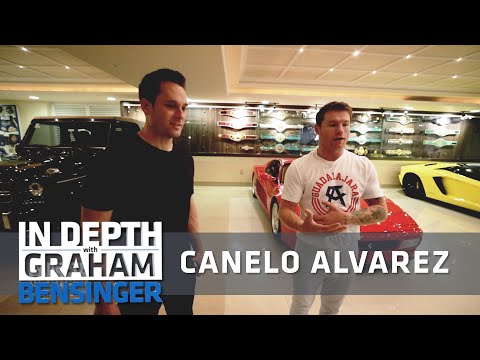