2 Are Super-SUVs the New Supercars? This Porsche vs Audi Drag Race Gives Us an Answer

Enough time has passed since the introduction of the reinvented, mid-engine C8 iteration of “America’s sports car” for everyone to agree by now that we are dealing with a mind-blowing sports car.
23 photos

Hey, even Koenigsegg founder Christian von Koenigsegg thinks that so who are we to disagree? Especially now, when it will not take long before the real first deliveries of Z06s commence and we are going to see a downpour of quarter-mile dragstrip adventures.

Well, until that stunningly FPC, naturally aspirated record-breaking inevitable V8 action happens, we can still warm up with even more features centered around the Stingray sibling. So, here is the videographer behind the Wheels channel on YouTube, who is back with more Corvette action after recently cooking up a swift C8 compilation (we embedded it second below, just in case you missed it).

This time around, we have focused on Mission Raceway Park for a singular outing of the Chevy versus Chevy variety. But what a brawl: it’s both of the Old vs. New and Sports vs. Muscle Car variety, frankly. The contenders include a dark, menacing black-and-red C8 Stingray in the right lane and a humongous, classic Chevy Nova – as the latter must contend with a severely increased ride height to incorporate all the modifications it received.

Clearly, this is one of those races where nobody can guess the outcome, even if one of the rides looks seemingly prepared for quarter-mile records. As it turns out, after a little bit of wobble and jiggles, the vintage yet brutish Chevy Nova quickly regained composure and managed to keep the upper hand it had after the first 60 feet or so. Then, it was all a matter of preserving the lead and teaching that modern hoot a little quarter-mile lesson, hence the 11.33s versus 11.92s result! Not bad at all, for both, right? 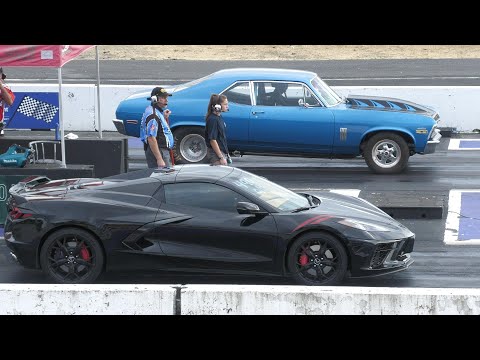 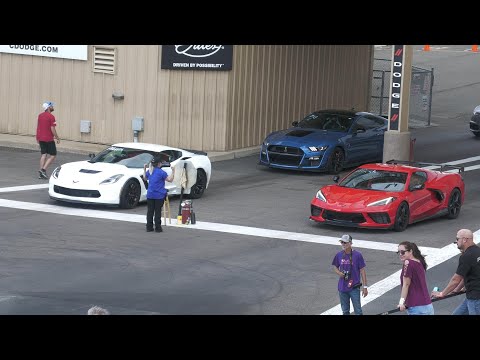