With all the commotion around the quick 2023 Chevy Corvette Stingray price increase or the hype surrounding “trivial” stuff like the bespoke Z06 NFT that arrived paired with a real-world car, one might be excused if previous incarnations were relegated to the background.
32 photos

Alas, when things concern the Corvette ZR1 monster, we are all eyes and ears. So, as we patiently wait for more news to break out about the C8 ZR1 incarnation that is expected in twin-turbo form with 850 hp for a few model years from now (2025 or 2026, at best), here is a feisty C7 Chevy Corvette ZR1 looking like Batman’s trusty supercar sidekick.

This all-black, winged Corvette ZR1 beast equipped with the LTK package is here courtesy of the videographer behind the Wheels channel on YouTube, who brings us a dragstrip feature (uploaded on June 15th, 2022) centered on the feisty quarter-mile “Batmobile” impersonator that graced the Bandimere Speedway audience with its menacing looks and 755-horsepower supercharged V8 roars.

Also known in the NHRA circuit as Thunder Mountain, the quarter-mile dragstrip located just outside Morrison, Colorado was the host for a trio of rather quirky encounters featuring this ZR1. Well, the first one is a bit more on the traditional side, but the surprise is that someone dared to fight off this flagship Corvette in something other than a Mustang Shelby GT500.

So, out of sheer daringness or complete foolishness – you should be the judge of which one – the first skirmish was between the ZR1 and an S-197 II Ford Mustang GT. Naturally, the result was as expected: 11.53s for ZR1 and just 14.48s for its Blue Oval opponent. Next up, from the 1:13 mark, the perspective of a cool surprise became prevalent as a rare Toyota Tundra truck lined up for the challenge.

Alas, the unexpected did not happen… at all. So, while the ZR1 did its 11.68s thing, the other lane was like a 17.84s stroll in the park! Last, but not least, we had some nasty expectations from the little Honda CR-X del Sol that came along from the 1:52 mark with an exposed front. But we are not going to give away the result… 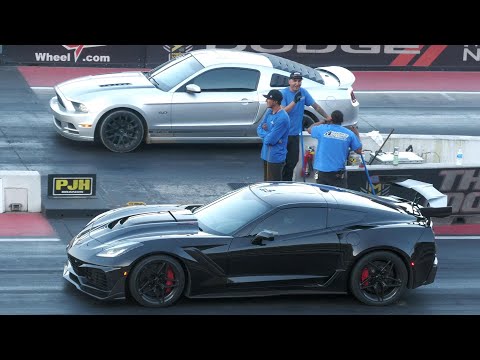