“Modest” Elon Musk Strikes Again: Mom Sleeps in a Garage When She Visits Him

While certainly not everyone’s usual automotive cup of tea, diesel power has its fair share of use-case scenarios where it beats rivaling gas options. Though, sometimes, it does happen in unexpected places.
27 photos

As such, diesel-equipped vehicles have their ardent fans. They usually do not mind “rolling coal,” though hopefully they only do it at the quarter-mile dragstrip and nowhere else! For anyone raising an eyebrow right now, we defer to the event announcer’s words: “I remember when diesel performance was an oxymoron.” Well, these are the strange times we live in…

And here is a good case in point when a Mopar had its way with the eternal GM and Ford rivals. Although, it is not exactly the kind of performance Mopar people would expect. Instead, we are dealing with a Dodge Ram pickup truck (is that a third-generation 1500?) because the videographer behind the Drag Racing and Car Stuff channel on YouTube has prepared another zMAX instance of the “always expect the unexpected” variety that occurred during the Street Car Takeover Charlotte (June 23-25) event at zMAX Dragway in Concord, North Carolina.

As part of the Heavyweight Class, the monster diesel truck first ducked it out with a black C6 Chevy Corvette that seemed to be driven by a rather inexperienced racer – as there were issues with the pre-race alignment. Alas, the pass was a clean one from both sides, though we can easily imagine the GM fans to be at a loss for words at the sight of “America’s sports car” losing to a truck. And doing so badly the difference was probably enough to include Artemis I between them…

Anyway, after putting things in perspective with a 9.68 to 11.36s victory, the big bad Mopar then wanted to see what a Ford muscle car has to say about it. The Mustang GT at the 1:15 mark looked cool and all, but even though it retained hope until the very end, that slow start cost it everything. So, again, the diesel truck rolled enough turbo coal to secure a narrower 10.14s to 10.44s win! 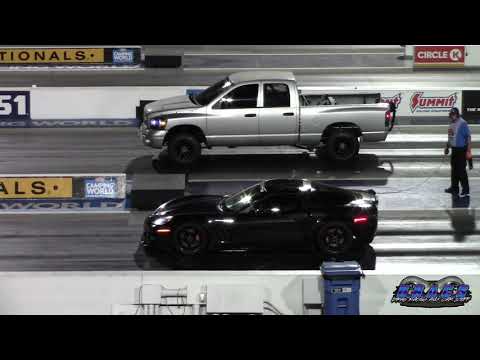