Bastille Day – or the National Day of France, is celebrated on July 14th each year to commemorate the historical storming of the Bastille (1789) as well as the unity of the French people that occurred during the ‘Fête de la Fédération’ on July 14th, 1790.
15 photos

Naturally, French automakers are not oblivious to its importance and Bugatti – for example – decided to explore the “intimate connection with the French Racing Blue color” that allows it to enjoy ‘La Vie en Bleu’ – aka life in blue. Even better, the company also sips in a mysterious teaser, claiming the shade will soon be “reinvented for a new era at Bugatti.”

For now, the exotic car manufacturer wants us to remember that blue has been a staple of its legacy ever since the Bugatti Type 35 enjoyed its early motorsport successes and up to contemporary achievements such as the introduction of the “era-defining” Chiron hypercar. According to Achim Anscheidt, Design Director of Bugatti, “French Racing Blue means passion, it means motorsport pedigree and it means patriotism.”

The official legend puts the inspiration behind this particular shade of color on Ettore Bugatti’s wife, Barbara’s fondness of a light-blue-packaged cigarette brand, and soon enough French Racing Blue even became informally known as ‘Bugatti Blue.’ Times changed once the Bugatti brand was reinvented under the VW AG banner and the Veyron was critically acclaimed in a new nuance, while the company even invented a blue-tinted carbon fiber.

Soon, the French company will embark upon a new adventure as it enters the joint company Bugatti Rimac era, and “the definition of a new ‘Bugatti Blue’ is already being considered as a core part of the brand’s future identity.” So, it is going to be interesting how the exotic brand handles its legacy while also storming into a more sustainable age with help from Nevera's creators. 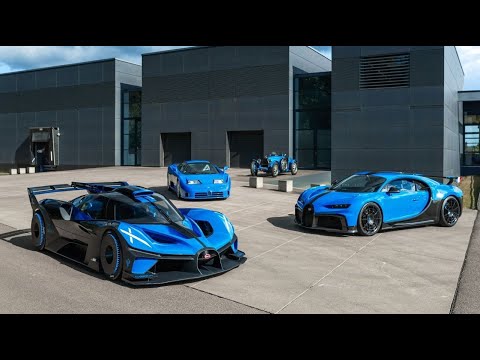