3 Hang On, a Mercedes-AMG SL-Class 2-Door Shootingbrake Is a Daring Grand Tourer

Just like the Ioniq 5 was previewed by the 45 EV concept and the Ioniq 6 was foreshadowed by the much better-looking Prophecy show car, Hyundai also paved the pixel way forward for the Ioniq 7 with the SEVEN prototype SUV.
14 photos

Unveiled last year at the 2021 Los Angeles Auto Show with a similar footprint to the Hyundai Palisade and deeply related to the concept that previews the Kia EV9 sibling, this three-row mid-size crossover SUV will probably act as the company’s flagship EV offering. And that’s not a bad thing.

While the Ioniq 5 is like a retro spaceship that arrived from a galaxy far, far away to teach us novel EV things, the Ioniq 6 surprised some with its quirky vintage design that is supposed to be fully streamlined but instead looks a bit too awkward. So, it’s going to be an acquired taste, frankly.

Luckily, Hyundai might soon be back on the right styling track with the upcoming Ioniq 7 battery-electric SUV, if we are to believe the SEVEN show car and unofficial series-production transformations. The latest one came out recently courtesy of the virtual artist better known as SRK Designs on social media. And his CGI perspective is rather simple and easy to grasp.

After all, everything has been presented in the latest behind-the-scenes making-of video (embedded below) and it’s clear that we are dealing with a quick SEVEN to Ioniq 7 makeover that follows swiftly after the pixel master imagined a more complicated Hyundai Ioniq 6 Coupe. Even better, the pixel master not only turned the concept into a regular production model but also took everything one step further, also infusing the Ioniq 7 with some “N” electrifying performance during the unofficial CGI process of coming to life.

Now, if not for the upcoming Hyundai Ioniq 5 N arriving next year, we might have thought this as merely wishful thinking. But now, that is perhaps better treated as premonition… 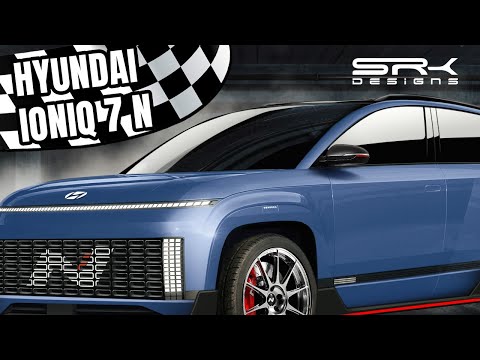