Earlier this month a huge downpour of monster rides occurred in Thunder Valley, California. It was time for the “Street Car Takeover” event at the Bristol Motor Dragway and the quarter mile aficionados certainly had a good time over the weekend (April 30th - May 1st). Some, a little bit more than others, though.
15 photos

The good folks over at the Drag Racing and Car Stuff (aka D.R.A.C.S.) channel on YouTube were present for the action and we’ve already sampled a few of the highlights, including some cool never-give-up type of comebacks.

Now it’s time for some particular action, though. As such, a recent video from the channel focuses on one of the most interesting apparitions there, a 2003 blower (instead of supercharged) Ford SVT Mustang Cobra. According to the description and our own research, this neat street ride belongs to a team called “Yerview Racing.”

The guys over there are definitely drag strip fans as they noted in one of their posts on social media that Thunder Valley’s raceway easily qualifies as “a bucket list track to visit if you love drag racing” thanks to its atmosphere, rather weird surface, as well as its history. We’re also willing to bet the good impressions were also due to the team’s great runs performed during the event.

Speaking of, the D.R.A.C.S. team has prepared a trio of them to make sure we’re getting the largest perspective possible. First up on the roster was a very cool-looking Honda Civic (probably a sixth-generation hatchback if our memory isn’t mistaken), but the neat camo paintjob and FWD powertrain didn’t do much to help against the monster in the other lane.

After all, this SVT Mustang Cobra iteration isn’t called “Terminator” for no reason, and the successful run was concluded with an 8.91s ET against the little Japanese’ not so shabby 10.91s pass. Then it was time for a little sibling rivalry from the 1:06 mark as the Cobra lined up with another New Age (fourth gen) Mustang.

That one was also left to collect dust from behind thanks to a stellar 8.89s to 9.38s result. Last, but certainly not least came the GM foe (from 1:58) in the form of a silver C6 Chevrolet Corvette. It ultimately didn’t stand a chance either against this well-oiled stick shift human-machine assembly, and the gap was just as eloquent as the 8.87s to 9.93s elapsed times. 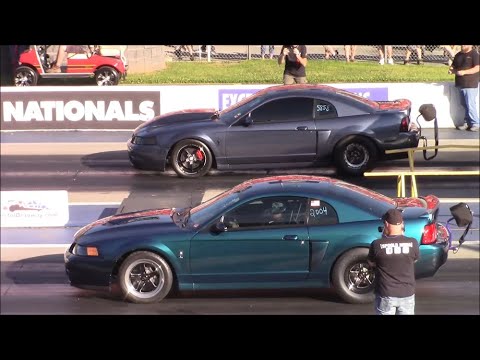