Triple Turbo BMW 335d Drags Will Kill the Planet, Not as Fast as Patina Ram 3500

We have grown used to seeing sometimes great, sometimes disappointing drag strip action involving Bavarian representatives of the BMW variety, but this time around, we’re taking a step back into the coal-rolling world of diesels. And this 335d is actually a street-legal racer, so it’s basically killing Earth with a 30-mpg average when traveling from home to the drag strip and back.
29 photos

Naturally, we accept the fact that diesel-powered vehicles still have their fans. Besides, at least these guys are literally coal rolling each other in a very safe environment, thanks to the Outlaw Diesel Super Series.

One of their events recently took place at the Piedmont Dragway racing track in Julian, North Carolina, and that’s where the latest footage caught by the Drag Racing and Car Stuff YouTube channel comes from. The focus is on a triple turbo BMW 335d of the E90 variety that keeps its tame stock appearance to fool its competitors into diesel submission.

Well, the black soot sprinkled on the doorsteps means it's got a side exhaust that alludes to something interesting under the hood, while the massive Hoosiers leave no doubt towards its drag strip warrior intentions. According to the description, the 335d was registered for battles in two classes at the Outlaw event, signaling a lot of confidence from behind the steering wheel.

Frankly, if we’re to judge everything just by the first encounter, we’d say it was misplaced. That’s because the Bimmer quickly meets its match and even gets trumped in terms of thick clouds of diesel smoke by the apparently beat-down, patina-infused Ram 3500 sitting in the other lane (precisely from the one-minute mark).

It seems no one has told the truck’s owner that two-tone paint jobs (triple, if we count the front bumper shade) aren’t usually arranged like this. Still, we can’t argue with the choice because it clearly took everyone by surprise (including us) with a winning ET of 6.68s against the 335d’s 7-second run (all races are of the 1/8-mile variety, as far as we can tell).

Fortunately, once in the 6.70 index class, the BMW settles into its own element and delivers a winning streak against more truck foes, both of the Chevrolet and Dodge-Ram variety. That allows us to say it somehow exacted vengeance on the latter series. 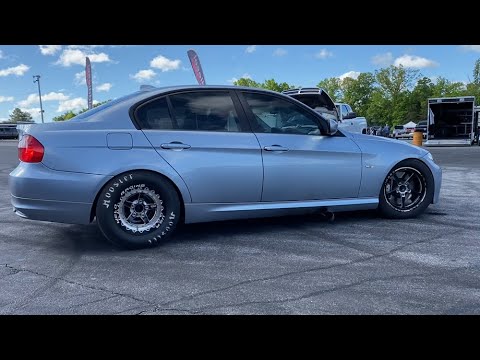