In December 1998, Ford introduced a significant facelift for the fourth generation of the Mustang, which included a redesigned body and upgraded powertrains.

Ford introduced the new-edge design theme in the automotive arena. The refreshed Mustang had a more masculine look with the introduction of the new design elements. Unfortunately, the American carmaker didn't want to get rid of the solid rear axle, which was way obsolete for a 1999 sports car.

While the 1994 'Stang didn't feature any straight line on its bodywork, the '99 model was almost the opposite. Angular headlights and taillights, sharp edges on the hood and sides, plus an extravagant fake air-intake on the rear fenders. But some would notice the same greenhouse design and, for the Cobra versions, the dome on the hood.

Inside, the rounded lines were still there, with a wave-like dashboard that resembled the original design of the 1964 ½ Mustang panel, but with a deep center stack extended to the center console. The front bucket seats were built for comfort, but the carmaker offered a pair with higher bolstering as an option. In the back, there was slightly room for two adults, but with minimal headroom. Since the rear axle was nowhere near the comfort zone, every bump on the road could have lead to brain damage.

Ford installed the 3.8-liter V6 engine for the base model mated to a 5-speed manual gearbox under the hood. Its power was increased by 45 hp when compared to its predecessor and reached 190 hp. For the 4.6-liter V8, the power was raised from 215 hp to 260 hp. Later on, the Cobra version provided up to 320 hp from the same unit. 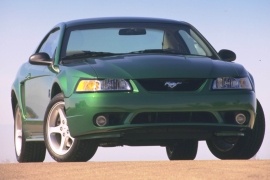