You know you’ve come across something really special when Shawn, the host of the AutotopiaLA channel on YouTube, skips the customary pleasantries and dives headfirst into the engine bay. We trust him to have seen enough custom builds by now to join him without any questions asked.
68 photos

Sure, there’s forty seconds of intro, just enough to give us a sweet taste of what’s coming – because this 2003 “Terminator” Ford SVT Mustang Cobra is also a looker. The owner went for a menacing all-black allure with lots of carbon fiber elements but also made sure to instill the car with enough personality, and the latter exudes from the finer details.

Now, let’s get back at what makes this project tick – a supercharged, 4.6-liter V8 engine that was completely taken out and enhanced from the stock 390 hp (at the crank) to no less than 700 to 720 ponies at the wheels! Of course, the 2.9-liter Whipple supercharger is a big part of the recipe, but there’s more to this than just slapping one in there and calling it a day.

As far as the exterior is concerned, no one is going to mistake this for an innocent – not with that bulging carbon fiber engine hood or the 315 Toyo tires at the back wrapped around shiny CCW replica wheels. It’s also hard to pass by unnoticed given the custom exhaust that gives the Magna Flow resonators a run for their money across the entire rpm line.

Besides the massive hood and carbon fiber rear spoiler, most of the other exterior modifications have been kept on a subtle level; though it’s just because the interior (seen from the 3:10 mark) is easily going “ballistic,” according to the host.

We tend to agree, since there’s a lot to cope with, including those Sparco seats that were modified by the owner himself, triggering a funny comment from Shawn: “that’s gotta’ be a little nerve-racking, taking a perfectly good seat and cutting into it.” The replica then says it all about the owner’s goal for this entire project: “You only live once, man!”

The actual drive starts from the five-minute mark, and from the get-go, our AutotopiaLA host brings back the discussion to the “bolstered, planted” seats. Still, we actually think the main hook of this chapter is the mesmerizing bad boy sound of the Whipple-supercharged Terminator Cobra, which clearly “makes you feel alive,” as per the owner’s own words.

It’s also one of those projects that speak to Shawn’s inner heart, who confesses to loving projects that don’t sacrifice drivability for the sake of making them look or sound great... “except for then it drives like crap!” Not the case here, as far as we can tell. 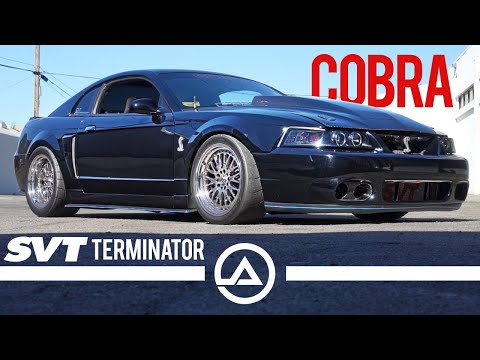