In the space of a few short years, we've gone from laughing at green cars to wondering if our performance champions even stand a chance against them. The company responsible for that is Tesla, and today, we're going to compare the RS3 sedan against the normal version of the Model 3.
1 photo
The Model 3 doesn't have the shock factor going on since we've been acclimatized to the performance of its EVs by its bigger, more expensive brother. But that doesn't mean the baby Tesla can't though a strong jab at the weak German chin.

Most of the Model 3 drag races we've seen thus far featured the expensive performance model. We've also marveled how a car could become faster just though a software patch. But today, the normal version is being put to the test with its rival being one of the fastest Audi models.

Don't let the fact that the RS3 is the cheapest RS model fool you; this car's 2.5-liter turbo engine and quattro launch system can keep up or even take down the V8 big boys like the RS7. Yes, the Tesla is about 400 lbs heavier than the RS3, but the battle is done over who can put down its power faster.

The long-range Model 3 has one 262-horsepower rear motor and one 197-horsepower front motor (188 and 147 kW) for a combined 367-hp. That's what the RS3 hatchback had when it came out. At 376 lb-ft (510 Nm), torque is about the same too. But the acceleration time of 0 to 60mph (97 km/h) in 4.4 seconds suggests Tesla might have a problem. But these are just some random official numbers. If that's the only thing that mattered, people wouldn't like drag races.

Obviously, demand for this electric sedan will not be affected by the result of this race, but just watch what happens anyway. The Model 3 gets a slightly better launch but the advantage dissapers instantly as the 5-cylinder engine roars to life and rockets the little sedan ahead. 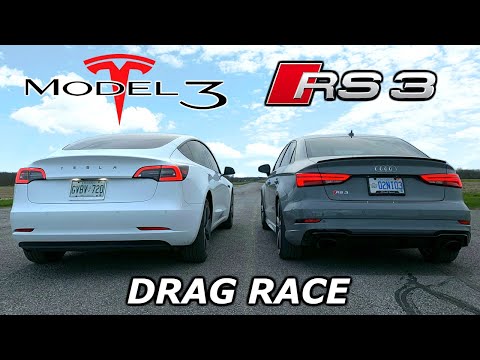