Alexandru Boghiu
It’s American muscle going against South Korean automotive brilliance today, as Sam CarLegion hops into his trusted 10-speed Ford Mustang GT to go against a Kia Stinger GT and a Dodge Challenger 392 RT at his and his buddies’ favorite drag strip of choice.
11 photos

It seemed to be just a regular day at work for the Stinger, launching as if from a slingshot and leaving its opponents in the dust. That didn’t stop the Mustang from at least trying to catch up, and for a few seconds it looked like it would, but that hope was shattered into pieces just seconds later, as the Stinger took the first place in the first race.

Somewhere in the back and light years away was the Challenger, whose 6.4L naturally-aspirated V8 engine (the biggest of the bunch) didn’t really help, since the car only got to the finish after the other two have already left the scene. Still, its 485 horses (492 ps) would soon awaken.

Taking the challenge more seriously and spinning a lot less the second time around, the Challenger had a respectable launch in the second race, but the Stinger snatched the crown again. The Mustang had a hard time catching up and arrived third, even though the race was closer overall.

As for the third go, the Stinger’s AWD proved to be helpful again. And even though the car has the smallest and least powerful engine of the three – granted, a twin-turbo 3.3L V6 with 368 hp (373 ps) and 508 Nm (375 lb-ft) of torque – it would’ve won the third race if it weren’t for that pesky Challenger, which turned the tables and kicked the Stinger’s crown off, only to pick it up and wear it.

So far, so good, but with two rolling races up next, the contest wasn’t over. Check out how it all turned out below. 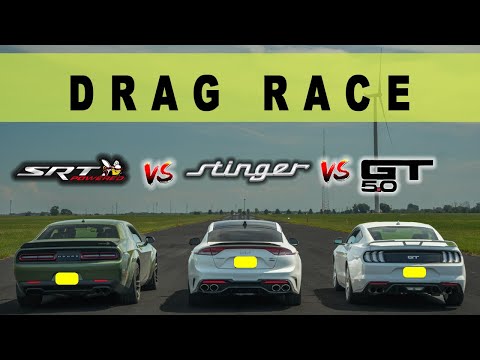