When Chevrolet and Ford axed most of their lower-priced sedans, the Korean carmaker charged ahead and brought premium features in a class where the price was the most critical selling point.

The Korean carmaker introduced the facelift for the Forte's third generation in 2020 for the 2022 model year. Even though it was during the world pandemic situation, Kia tried to keep its promises to its clients. With a refreshed front fascia that featured narrower headlights, with an option for LED foglights, depending on the trim level. Also, it included redesigned LED taillights. The carmaker added new light-alloy wheels with 16" and 17" sizes for the drivetrain, depending on the trim level.

Inside, all versions received a new TFT instrument cluster that replaced the analog-dial system featured on the 2018 model year. An 8" or 10.25" touchscreen was installed on top of the center stack, depending on the trim level. Kia also offered a Harman Kardon sound system, usually found in premium vehicles. Kia added a set of leather-wrapped front bucket seats with red logos embroidered on the seatbacks for the newly introduced GT trim level.

All Forte versions came fitted with six standard ADAS (Advanced Driving Assistant Systems) and up to 15 available as an option for the safety department.

Under the hood, the carmaker offered the Forte with a choice of two engines, which provided 147 hp and 201 hp, respectively. A six-speed manual was fitted as standard, while a seven-speed automatic (dual-clutch) was available as an option. 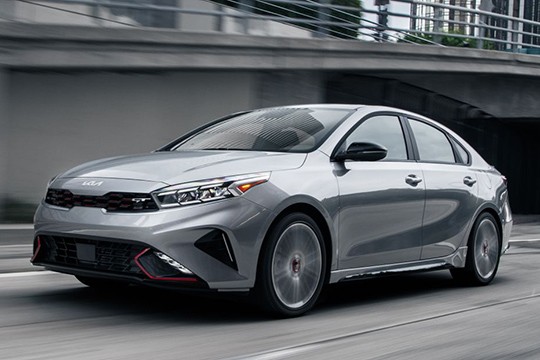