Sometimes, it’s best to defy expectations. For example, Sam’s usual hosting duties for his Sam CarLegion channel on YouTube just got humorously subverted by his friend Jim. No worries, though, as the drags and rolls occurred exactly as planned.
40 photos

Anyone new to Sam CarLegion’s stories might want to know a little about the host and his efforts. Usually, the latter center around one-on-one drag and roll races between the latest and hottest models on the market. Not just flagships, though. It is mostly about cars, SUVs, and trucks that anyone can park in the driveway.

Sure, there is an occasional three-way or a review, here and there, but most fans are watching Sam for his cool quarter-mile battles. As for the host, although he looks totally affable, he usually presents himself as serious as one can be. Save for this time around, when his friend Jim managed to subvert his traditional hosting duties. And he charmingly played along.

As for the race itself, it’s between the Infiniti Q50 Red Sport 400 and the 2021 Acura TLX Type S. The latter has been quite involved with the channel, appearing in several previous battles. This time around, it’s all about turbocharged V6 glory here, as both cars sport a 3.0-liter mill. Several details do make a difference, though, as Infiniti’s Q50 brings to the table 400 ponies to Acura’s smaller stable of 355 hp.

Besides, there’s also a sensible weight difference. So, after reading the specification sheet, one can already imagine the outcome. And it pretty much reflects what’s on paper throughout each of the races. 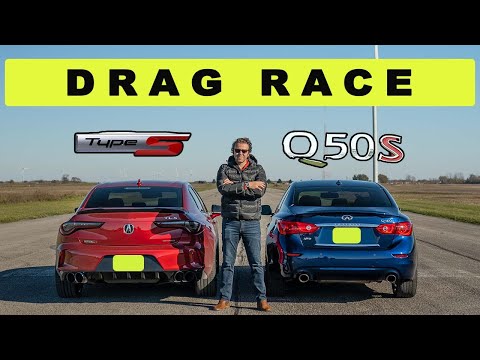