Aurel Niculescu
Everybody loves to see how the cream of the crop fares in various battle scenarios. We all feel the need for (absolute) speed from time to time. But the reality is most drivers out there have “mundane” vehicles.
43 photos

So, don’t they deserve a chance at securing bragging rights as well? The host of the Sam CarLegion channel on YouTube seems to think so. After all, he does tend to the one-percenters from time to time, but many of the races feature cars, SUVs, and pickup trucks that are accessible to everyone.

For example, it’s nice to see how the Jeep Trackhawk, BMW X5 M Competition, or Range Rover Sport SVR brawl. It’s also cool to find out the difference between the 2021 Ram TRX king and a tuned Ford F-150 that tries to snatch its crown. But let’s face it, a lot more people might be driving a run-of-the-mill luxury SUV such as the BMW X5.

A sporty yet far-from-flagship X5 40i just came out for a skirmish against the “new kid on the block,” South Korea’s Genesis GV80. Just to make it as fair game as possible, the former’s 335-horsepower 3.0-liter inline six-cylinder meets the 3.5-liter twin-turbo V6 made by the Hyundai Kia group to churn out 375 horsepower.

Remember, this is BMW we are dealing with. And there is a (well documented) legendary rumor that Bavarians like to undermine their power ratings. So, with the hypothesis that an X5 40i makes a bit more power and the GV80 being slightly heavier, this should turn out level on the playing field, right?

Well, we could not be more wrong. As evidence, there is a trio of drag races. The first one (5:18) is done in Normal mode with Comfort setting, the second (6:20) in Sport, while the third (7:52) is also in Sport, but with traction control off. Irrespective of the chosen settings, the result is the same. One could sneak a semi-trailer or a school bus in between the victorious X5 and the GV80.

And although it’s been shown to produce surprises from time to time, even the 50 kph (31 mph) roll race (seen at the 9:07 mark) doesn’t change the fact that BMWs are probably severely underrated from the factory. 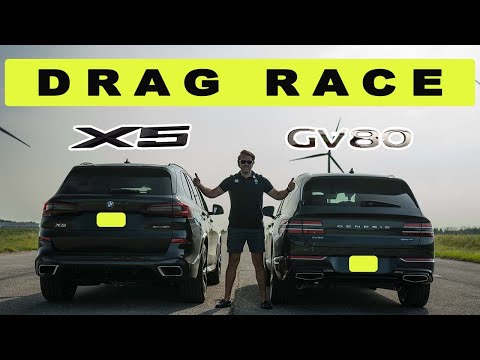