Considered one of the leading automotive performance shops in Fayetteville, Georgia, Kaotic Speed is also the place to spot vintage models that could easily steal the spotlight from their modern counterparts.
16 photos

Case in point, this 1975 Chevrolet Caprice Hi-riser was spotted paying a visit to the shop that handles everything “from mild to wild.” Late in the video (embedded below) from the WhipAddict channel on YouTube, the second-generation Caprice convertible is making its way up the towing platform (on its own, no worries). And at the same time, a modified and contemporary Camaro is also making its way out of the shop.

So, which of the two convertibles would stand out in any crowd? Our money is on the classic representative of the Chevrolet breed. And it’s not just because of the traditional donk-like qualities. They’re all there, all right, from the heavy customizations to the nose-up stance that aims to complement the sloping rear.

But, as they say, the devil is in the details. This is because the ‘75 Caprice is extremely clean and – dare we say – it might even get under the skin of people who usually don’t fancy such types of rides. For starters, the Chevy owner didn’t go to aggressive extremes with the styling. Instead, he or she opted for a classy blend of elegance and performance.

On the outside, the Caprice wears a subtle yet stylish Root Beer makeover which is complemented by the tan leather interior. That’s not all, because the Chevy also rides on gold-painted 26-inch Amani Forged wheels. As always, beauty is in the eye of the beholder, but it feels that it’s more than enough to wow the crowd without being overdone.

Naturally, we also spotted a matching gold steering wheel in the same vein as the wheel design, while the performance chapter is also copiously covered. As such, under the hood sits a 572ci Big Block Chevy V8 engine and although we see the vehicle immediately getting on the trailer after the shop visit, we know it’s meant to be driven. After all, it also comes with modern Wilwood brakes. 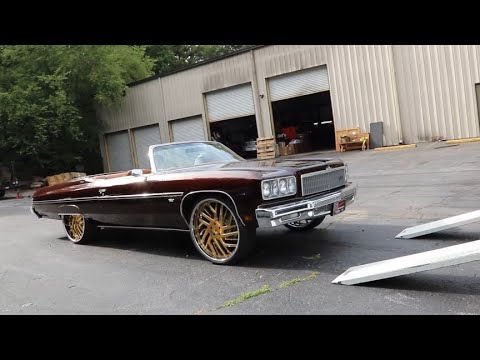