A triumph at the world’s most famous endurance race is one of the most sought-after achievements in motorsport. In the last three editions, Toyota has disrupted the dominance of European manufacturers, but it wasn’t the first Japanese carmaker to do so. In 1991, Mazda defied all odds and claimed the victory using an engine with no pistons.

The year was 1991, and the Japanese manufacturer’s Mazdaspeed division was preparing for its ninth consecutive Le Mans race. Although the team’s greatest accomplishment was finishing 7th in 1987 and 1989, with former six-time Le Mans winner Jacky Ickx now on board as an advisor, confidence was high. The 787 race car, which they ran a year earlier, was extensively tweaked and showed a lot of promise during testing.

Called 787B, it was powered by the same 2.6-liter R26B four-rotor engine used in 1990, but it featured a newly developed continuously variable intake system that increased torque to 448 lb-ft (608 Nm).

Fuel efficiency was a major problem in past years, so engineers also limited the redline to 8,500 rpm, thus reducing the power output to around 650 hp (485 kW). That was still more than adequate to remain competitive.

The chassis was also improved, with the suspension geometry reconfigured to allow the use of larger wheels, along with carbon-ceramic brakes, a first for Mazda.

For the 59th edition of the 24 Hours of Le Mans that took place on June 22 and 23 that year, Mazdaspeed entered two 787B cars and a 787 that featured the same upgraded engine. The latter no. 56 car was driven by Pierre Dieudonné, Takashi Yorino, and Yojiro Terada. The first 787B, which donned no. 18, was shared by David Kennedy, Stefan Johansson, and Maurizio Sandro Sala, while the second 787B car with no. 55 saw Volker Weidler, Johnny Herbert, and Bertrand Gachot take turns behind the wheel.

Unlike the other two Mazdas that were painted in blue and white, the no. 55 had a wild bright orange and green livery as a tribute to the main sponsor, Renown, a Japanese clothing company that had been backing the team since 1988.

During the qualifying sessions, the cars managed the 12th (No. 55), 17th (No. 18), and 24th (No. 56) fastest lap times, so nobody really believed they could stand a chance against the Sauber-Mercedes or Jaguars, which were seen as favorites.

The 1991 race saw the debut of the 3.5-liter engines, and the FIA allocated the first ten spaces on the grid to the fastest qualifying cars that used these new powerplants. It meant that the Mazdaspeed challengers were relegated seven positions, starting the race 19th, 23rd, and 30th.

Since the 737B proved to be extremely reliable and fuel-efficient during prior testing, team manager Takayoshi Ohashi instructed the drivers of the no. 55 car to drop the conservative strategy and drive as if they were competing in a short sprint race. Thus, in the early stages, the car moved up 16 positions, trailing only the two leading Sauber-Mercedes C11s.

As the hours went by, the no. 31 Mercedes of Michael Schumacher, Fritz Kreutzpointner, and Karl Wendlinger had to pit several times to fix a gearbox problem and lost the second place, while the other C11 was slowing down to preserve fuel.

With about two hours left to go, the leading car ran over debris which led to extensive damage. It was taken back to the pits, but engineers were unable to fix the issues, so it was subsequently retired. That meant that the no. 55 Mazda was now in the lead with a comfortable advantage over the second-place Jaguar XJR-12.

Even though a driver change was scheduled for the last pit stop, Johnny Herbert asked the team to carry on, and after everyone agreed, he drove the 787B across the finish line, two laps ahead of the trailing Jaguar.

Due to extreme dehydration, Herbert had to be helped out of the car and was immediately taken to the circuit's medical center. He was unable to climb up the podium, leaving Weidler and Gachot to enjoy the festivities.

This accomplishment meant that Mazda became the first Japanese manufacturer to grab a Le Mans win overall, much to the delight of the fans back home in Japan. Moreover, the 787B was the first rotary-powered car ever to cross the finish line first.

The no. 55 787B was retired from duty immediately after Le Mans and was eventually shipped to the Mazda Museum in Hiroshima. It made several appearances at Sevenstock, the largest annual gathering of Mazda rotary enthusiasts in the world held annually in California. Ten years ago, it was fully restored and driven by Johnny Herbert at Le Mans once again, prior to the 2011 race. 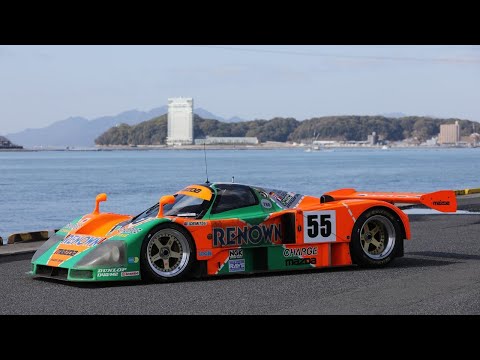