2 Italian-Made De Tomaso Deauville Was a Flop, but It Was the Basis of the Modern Maserati

Based on the fifth-generation Quattroporte, the GranTurismo was launched in 2007. Referred to as M145, the V8-engined coupe and its convertible sibling were offered until 2019 with very few updates.
11 photos

Three years ago, the Italian automaker unveiled the one-off Zéda that marked the end of series production. More than 40,000 units were delivered, of which 28,805 came as coupes and 11,715 were finished with a soft top.

The GranTurismo and GranCabrio used Ferrari-sourced V8s of the naturally-aspirated variety, with displacements ranging from 4.2 to 4.7 liters. As opposed to the Ferrari-spec F136, the Maserati-spec F136 uses a cross-plane crank that makes it sound a little burblier at low engine speeds.

Considering that Maserati switched to a twin-turbo V8 in 2013, also developed by the Prancing Horse of Maranello, it’s high time for the House of the Trident to bless the GranTurismo with forced induction. The carparazzi spotted a combustion-engined GranTurismo testing at the Green Hell, yet it’s not a V8. The camouflaged prototype rocks a V6, namely the Nettuno of the MC20. Based on the way it shifts, we’re also dealing with a torque-converter automatic, most likely the 8HP from ZF Friedrichshafen.

To whom it may concern, the mid-engine supercar uses an eight-speed transaxle with a dual-clutch design. Supplied by Tremec, the TR-9080 was introduced for the 2020 model year in the eighth-gen Chevrolet Corvette.

Although it doesn’t sound as exotic as before, the GranTurismo is certain to exceed the output figures of its V8-engined predecessor. In the MC20, for example, the Nettuno belts out 621 horsepower and 538 lb-ft (730 Nm).

Prospective customers who don’t care about exhaust sounds will be tempted by Maserati with the Folgore, the designation they’ll use for the all-electric powertrain. A three-motor affair with more than 1,200 metric ponies on tap, the GranTurismo Folgore has already been photographed uncamouflaged at Pebble Beach in California. For some reason or another, the Italian automaker has yet to publish official pictures and details of the Folgore. 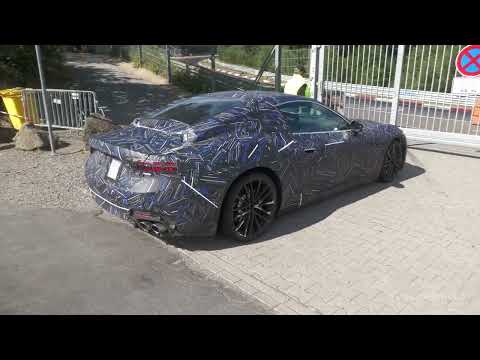