The Maserati Ghibli was upgraded in August 2020 with a twin-turbo Ferrari engine, that brought more grunt to the smaller Italian sedan.

Maserati was in constant evolution in 2020, despite the hard times caused by the world pandemic situation. It launched new models, such as the MC20 supercar, and a more powerful version for its four-door models. The Ghibli was the entry model for the four-door lineup. It was built for the customers who were looking for a supercar dressed as a regular, four-door, sedan.

From the outside, the Trofeo looked similar to the regular Ghibli, but some details made a difference. At the front, the car featured a different bumper and apron design, with a wider center grille and modified side-scoops to cool the brakes. The hood was modified and featured a pair of vents, to help to cool the engine. From the side, the front fenders featured three vents with red trims and the Trofeo badge. On the C-pillars, under the brand's badge, a red stripe was installed.

Inside, the Trofeo was fitted with the best amenities available in the Maserati storage. The instrument cluster featured a TFT color display between the speedometer and the tachometer. The infotainment system was fitted with a big touch-screen on the center stack. To complete the sporty character of the car, carbon-fiber trims were installed on the dashboard and the center console.

It was the first time when a V8 found its way into the Ghibli range. A 3.8-liter engine was placed under the hood and paired to an 8-speed automatic transmission. Power went to the rear wheels only, via a standard limited-slip differential. For better control of the 580 hp, the Ghibli Trofeo was fitted with an Integrated Vehicle Control (IVC) system, tuned for enhanced vehicle dynamics, and better active safety. 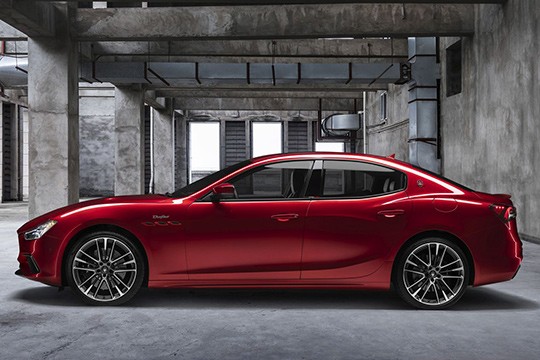