5 BMW i4 Already Has a Recall Due to Lack of Battery Pack Crash Pads
Car video reviews:
Up Next

Filmed testing near the Arctic Circle, this prototype of the M3 Touring appears to be as planted as family wagons get in sub-zero weather. Dubbed G81, the family-sized tourer is gifted with conspicuously large front air intakes, four exhaust tailpipes, widened axles, and low-profile winter tires.
17 photos

Previously tested at the Nardo high-speed oval in Italy, the Sachsenring racing circuit in Germany, and at high altitude in the Tyrolean Alps, the M3 Touring is masterminded by project head Robert Pilsl and product manager Hagen Franke. Developed to fill the gap between the sedan and X3 M, this fellow can trace its roots back to the boxy-looking M5 Touring from 1992.

As for the G81, we’re dealing with a smaller displacement (3.0 liters) and two spinny boys for some boost. The direct-injected S58B30T0 is rocking twin-scroll turbochargers developed to increase low-end torque and improve boost response. In the M3 Sedan Competition xDrive, this mill cranks out a hearty 503 horsepower and up to 479 pound-feet (650 Nm).

The M3 Touring will have only two rivals in the guise of the V6-engined Audi RS 4 Avant and Mercedes-AMG C 63 T-Modell. Also worthy of note, the next-generation C 63 relies on a four-cylinder engine rather than a wet-sump V8 with a hot-vee layout for the turbos. It’s also important to mention PHEV assistance which will bump up the output to 600+ hp in overboost mode. 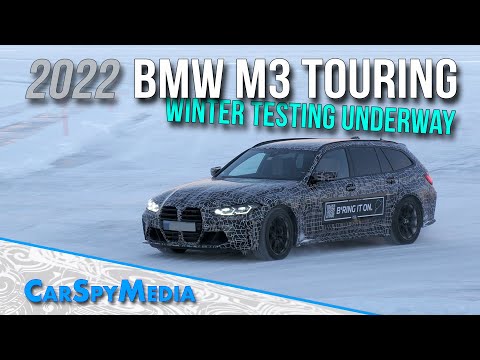