Home > News > Auto Motorsport
Mircea Panait
For the 2015 model year when this particular F82 was produced, BMW charged a little over $64,000 for a twin-turbo six with 425 hp and 406 pound-feet (550 Nm) of torque from 1,850 revolutions per minute. The black-painted Bavarian coupe in the featured video, however, is anything but a stock car.
9 photos

Fitted with pretty darn sticky drag radials and street-and-strip performance wheels from Missouri-based Weld, the Bimmer also rocks approximately 650 horsepower thanks to a well-deserved tune. Torque has gone up as well to 550 pound-feet (just under 746 Nm) and coupled to a dual-clutch gearbox, one can only imagine how quick this car is over the quarter mile.

Tipping the scales at 3,728 pounds (1,691 kilograms), the M4 is challenged to a straight-line showdown by an unmodified Dodge Challenger SRT Hellcat. A bit of a heavyweight at 4,448 pounds (2,018 kilograms) due to its relatively old underpinnings and ginormous HEMI engine, the American muscle car relies on the ZF 8HP torque-converter auto for cog swapping.

The 6.2-liter Hellcat hiding under the scooped hood cranks out 707 horsepower and a meaty 650 pound-feet (881 Nm), figures that can easily overwhelm the rear tires. More specifically, the Challenger in this configuration dons 275/40 R20s compared to 315/40 R18s for the Demon.

Not only is it tricky to launch the Hellcat without too much wheelspin, but the rear tires can’t do much about the engine’s torque from second to third gear either. Even from a roll, the Hellcat simply cannot gap the tuned M4.

The right tires go a long way in a quarter-mile race, as does the transmission’s design and programming as well as the launch control software. Given the limitations of the current platform, Dodge is currently developing its next-generation halo car.

Last year, Dodge teased an electric muscle car that can do four-wheel burnouts. An electric concept that previews the yet-unnamed model is due to be presented this year, and the production variant is due in 2024. 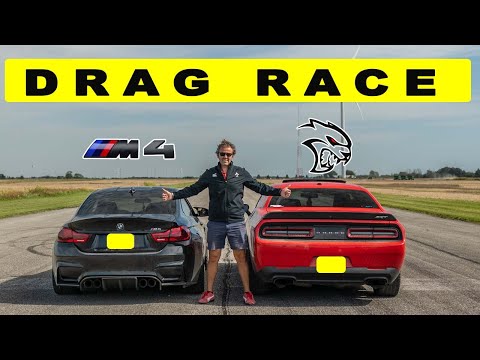