1 Choose Your Big Rig Star Wars Day Side Carefully, and May the 4th Be With You!

3 May the 4th Wasn't With Robogirls. They Tried to Steal Darth Vader's Ferrari F40!

Let us take a virtual break from the latest polemic-inducing German design (aka X7 LCI, 7 Series, and i7) and focus on something else, though just as premium. The virtual artist better known as SRK Designs on social media proposes to play with the next-generation Audi A4 sedan.
17 photos

Out of the German compact executive sedan triumvirate, the Ingolstadt-based manufacturer has the oldest surviving member of the current generation roster. Unlike the G20 BMW 3 Series sedan (seventh generation), which has been in production since late 2018, or the fifth-generation W206 Mercedes-Benz C-Class, which is even newer, the B9 Audi has grown longer in the tooth.

There is a six-year difference between the C-Class and A4, for example, as the former’s latest iteration has been around since last year while the latter was unveiled in 2015 and went into production for the subsequent 2016 model year. Sure, it is not as old as Dodge’s Challenger, if you need an extreme, but we all know the muscle car competition is a bit different from the monster world of premium German sedans.

Naturally, that also means Audi is well on its way with the testing procedures for the “B10” generation, as our partner spy photographers most recently caught the 2024 A4 Avant station wagon flaunting its shrunken grille around. Still, even virtual automotive artists take things logically, so we first need to unofficially decipher the design for the traditional sedan body type.

The virtual artist better known as SRK Designs on social media has decided to play with another premium member of the German triumvirate after dabbling with both the X7 LCI and taking the 2024 BMW 5 Series for a CGI spin with the new split-headlight design style. But the smaller 2023 A4 sedan eschews any sort of controversy.

And instead, it adopts a subtle digital transformation akin to what Mercedes blandly did with the C-Class. So, is this evolutionary design shown during the author’s latest behind-the-scenes making-of video (embedded below) more to your liking or do you prefer the M3-style craze? 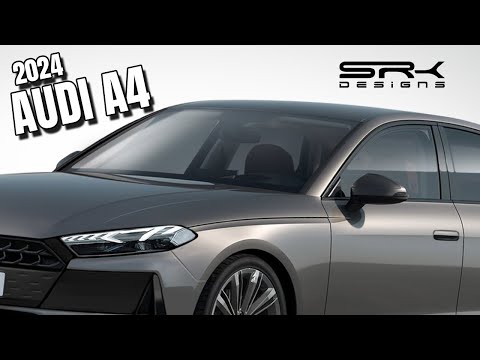