2024 BMW 5 Series Gets Inevitable Split-Headlight Look, Only Virtually for Now

Since the introduction of BMW’s new controversial subject – the split headlamp styling of the X7, 7 Series, and i7 – there has been quite an obsession brewing among virtual automotive artists. And it does not seem to end, but rather spread even further.
13 photos

Lots of pixel masters jumped at the occasion of showcasing their own two cents on the seventh-generation 7 Series flagship matter. And once the ideas for making it better (or worse) have thinned out, they naturally focused on other, related CGI prey. For example, some unofficially gave the upcoming 2024 Rolls-Royce Spectre the same styling “virus,” while others expanded the reach within BMW’s lineup.

Thinking the BMW 8 Series will make a likely next candidate for the split-headlight “botox” treatment is obviously sane. But there are others who believe the new corporate look will eventually reign down even over lesser nameplates, such as the upcoming 5 Series executive sedan. Well, the 2025 BMW M5 prototypes are already out there in the (winter) wilderness, so we know for sure the Bavarians are diligently taking care of the research and development procedures.

Hopefully, that will make the next super sedan land missile a little more reliable going forward. Because if the virtual artist better known as SRK Designs on social media has his way – it is surely going to be the talk of the town when it “gets the inevitable look with the split headlamps which we have seen on the new BMW X7 and the latest 7-series and the BMW i7.” Better yet, there is also a new behind-the-scenes making-of video (embedded below) to expand the “appeal” of the proposed fresh look.

Additionally, we also have a couple of examples of how CGI experts incessantly seek new ways of standing out in the quirky new 7 Series crowd: an improbable yet enticing M7 CS, as well as an impossible two-door coupe version of the regular 7 Series… 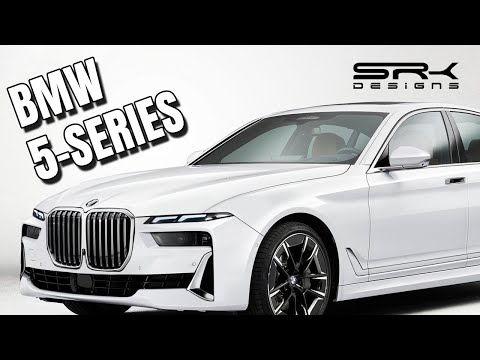