1 2021 Rolls-Royce Ghost Is Here: Modern and Less Opulent, but Just as Luxurious

3 Rolls-Royce Ready for the Next Chapter, Presents Itself as "House of Luxury"

A visit at the Home of Rolls-Royce in Goodwood, Great Britain, is always a special thing. For anyone, not just the recently unveiled second-generation 2021 Ghost. But how about meeting some of the finest, oldest, and most exclusive vintage Rolls-Royce models has created in the years before the Second World War – that would certainly qualify as a “once in a lifetime” opportunity.
17 photos

Rolls-Royce managed to arrange just that. With some help from the members of world’s oldest Rolls-Royce car club that were invited on the premises to partake in a special preview of the new Ghost at the company headquarters, mere days after the official (online) unveiling.

The 2021 Rolls-Royce Ghost was joined in Goodwood by an exquisite lineup of twenty Rolls models from the distant past – the number exactly corresponds to the exclusive “20-Ghost Club,” considered the pinnacle of vintage car clubs dedicated to the ultra-luxurious British brand. How exclusive you might ask – well, no Rolls-Royce older than 1940 is allowed.

More so, the 20 cars – the eldest built in 1911 and the youngest produced back in 1936 – relied on their own forces for the trip to Goodwood, a great tip for Rolls to mention that almost three quarters of all cars produced by the marque since 1904 are still in working condition even today.

With the company everything has to be a little different, so the drivers and owners of the roster of vintage Rolls’ (which included models such as the 20/25, Silver Ghost, Phantom I and II) were treated to a socially distanced picnic that included champagne (obviously!) but also locally produced Rolls-Royce honey, sourced from the Goodwood Apiary that is host to a colony of around 250k of English honeybees...

For the members of the club, already accustomed to their vintage motoring diamonds, the highlight of the day was the chance to personally meet the new Ghost. Rolls-Royce is making sure the new generation follows in the footsteps of its successful (as in best-selling) predecessor with the new Architecture of Luxury aluminum spaceframe and the ubiquitous 6.75-liter V12 engine.

One interesting Silver Ghost that was present at the event actually celebrated a century of existence on the premises. The model, styled as a Limousine Body by HJ Mulliner, was manufactured back in September 1920, exactly 100 years ago – and still enjoys the open roads when joining 20-Ghost Club tours. 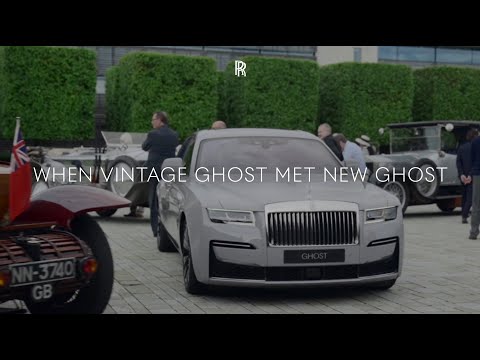