Only 760 units of the first Rolls-Royce to bear the Silver Dawn name were built between 1949 and 1955, albeit the car shared most of its oily bits and chassis with the slightly more mainstream Bentley Mark VI until 1952 and then with the Bentley R Type until 1955.

This means that all cars were fitted with a 4.2-liter straight-six until 1951, when the engine was enlarged to 4.6-liter.
Curiously enough, the Silver Dawn is the first ever Rolls-Royce model to be ordered with a factory built body, unlike its predecessors, which were exclusively sold as rolling chassis. Even though its successor spawned an entire era of the Silver Cloud name, the Silver Dawn name was first resurrected in the mid-1990s, on a special edition version of the Silver Spur Sedan. Nowadays, the Dawn name is used by a four-seat convertible version of the Rolls-Royce Wraith coupe.
The Silver Dawn was launched in austere time and as such, Rolls Royce wanted to offer people a more accessible car, mostly for the buyers who were looking to drive themselves. Most of the Rolls Royce launched by that period were luxury limousines and usually driven by chauffeurs.
The car had a 4556 cc engine, with a 4-speed manual transition. The Rolls reached 60 mph in 16 s and had a maximum speed of 87 mph. 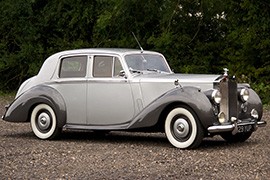 3 Dad Buys His 5-Year-Old Daughter a Rolls-Royce Cullinan, She Gets Behind the Wheel