1 Moneybagg Yo Seems to Have a New Car, Starts White Collection With a Rolls-Royce Ghost

2 Rolls-Royce's 20 Crown Jewels Under BMW's Reign, Part 2: A Glimpse Into the Future

More than one century ago, Charles Rolls considered that the ultimate luxury car should have an electric motor since it lacked the smell and the vibrations of an internal combustion engine.

Fast forward to 2022, and after two World Wars, economic downturns, and technological breakthroughs, the famous British brand finally unveiled its first production-ready electric vehicle. Yet, it was not a limousine but a personal luxury coupe. The most elegant luxury coupe in the world.

Right from the start, the Spectre surprised the audience at the 2022 Paris Motor Show with its size. It was larger than many other four-door luxury sedans. Its dominant front fascia featured the broadest grille ever installed on a Rolls-Royce. It was flanked by LED headlights. Like any other Rolls-Royce, the car featured the famous statue of Spirit of Extacy that adorned the hood. The automakers' engineers spent no less than 800 hours adjusting the statue's shape so it could create less drag. On the sides, the majestic coupe revealed a fastback silhouette and massive rear-hinged doors. Another first for the industry was the 23" light alloy wheels with a unique design. Finally, at the back, the flush-to-bodywork taillights fitted with LED created the illusion of a wider vehicle. Not that it was needed.

Inside, Rolls-Royce used only environmentally-friendly materials. There were no dials nor gauges on the instrument cluster, only a wide display. Also, for the infotainment unit, the car manufacturer used a touchscreen. As for the rest of the interior decoration, Rolls-Royce inserted thousands of LEDs in the door cards, the rear panels, and the ceiling. The sound system was custom-made and branded with the carmaker logo.

The all-electric powertrain sent the power to all corners of the massive vehicle. But, despite its impressive weight, the Spectre could hit the 60 mph (97 kph) mark from a standstill in less than five seconds. 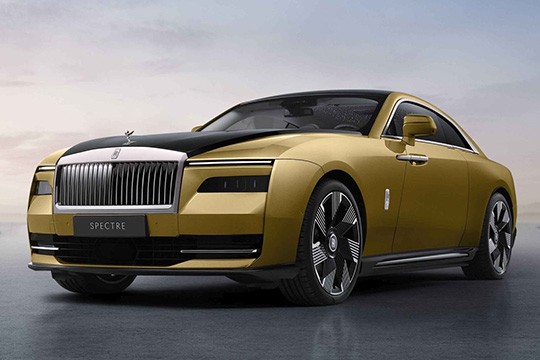