2 Detroit’s Big Three Come Together in Shared, Big "Aspiration" for the EV Market

5 Ford COO Says Brand Will Spend More on EVs Than on ICE Cars By 2023
Car video reviews:
Up Next

2021 Ford Bronco Gets Doug DeMuro’s Thumbs Up, Cheap Plastic Trim Lets It Down

The hottest SUV of the year, the 2021 Ford Bronco has finally been reviewed by Doug DeMuro. Pictured in Antimatter Blue with the molded-in-color hardtop, this particular example doesn’t feature the Sasquatch Package that improves the off-road capability of the utility vehicle.
44 photos

Be that as it may, Doug isn’t exactly fond of the ride quality. It’s nicer than a four-door Wrangler, the steering and handling are nicer as well, but ride quality still is harsh in comparison to a unibody crossover with independent rear suspension instead of a body-on-frame utility vehicle with a solid axle.

DeMuro also highlights the noise you always hear on the highway although this Bronco is equipped with the sound-insulating headliner, and the bad points don’t end here. When specified with rails, the molded-in-color panels are difficult to remove. The frameless windows don’t go down quickly enough when you open the doors, as demonstrated by Doug, which is a little underwhelming for a $56,000 overlander with a 2.3-liter EcoBoost.

The biggest imperfection of the Bronco is the low-quality plastic used pretty much everywhere in the cabin. “It’s just not really all that nice in this car,” highlights Doug, who also uses “crappy” and “generic” to describe the trim.

With the drawbacks out of the way, let’s talk about the nice stuff. As opposed to Jeep Wrangler, the Ford Motor Company has fitted side curtain airbags to the Bronco for extra peace of mind. The brawny styling is to die for, and the base four-cylinder motor is more than adequate in conjunction with the seven-speed manual that features a crawler gear. Regardless of transmission choice, this engine is the one to have on the long haul for it returns up to 22 miles to the gallon (10.7 liters per 100 kilometers) on the highway. The 2.7-liter EcoBoost V6 lump, by comparison, tops 20 mpg (11.7 l/100 km).

All in all, Doug can’t help but love the Bronco. This becomes very obvious at the end of the video where the Bronco is listed up above the Jeep Wrangler, Ford Bronco Sport, Toyota 4Runner, and Tacoma on the Dougscore board. 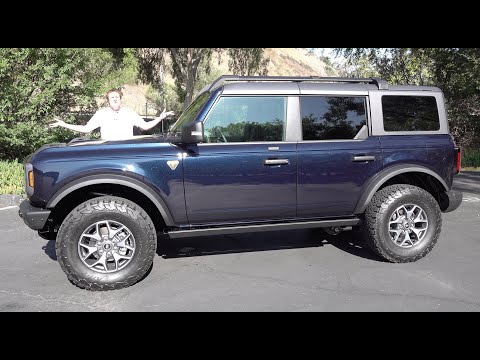