5 F-150 Raptor Owner Parks It Next to 2021 Bronco, Has Wildtrak Order on the Way
Car video reviews:
Up Next

It won’t take long, and the 2021 Ford Bronco will finally hit dealerships across America for the eagerly anticipated first deliveries. But, before that happens, there might still be people that need help finding the right Bronco trim for them. So, here’s a look at both the Badlands and Wildtrack grades to spot the differences that make these two great choices for different types of customers.
15 photos

Before anyone starts wondering how the host of the Town and Country TV channel on YouTube managed to grab some one-on-one time with both the $44,590 Bronco Badlands and the $49,475 Wildtrack 4-Doors, it’s safe to say that we’re still dealing with a couple of pre-production prototypes.

The host was in Texas for a Bronco Off-Roadeo preview because the TC TV channel is actually owned by a Ford dealership in Birmingham, Alabama, so it’s only natural they had early access to such Blue Oval events. But that’s a good thing, because they were able to get the Badlands and Wildtrack side by side for a thorough comparison of the perceived differences (and some mostly off-camera off-road time).

First up comes the slightly cheaper Badlands, which is the “extreme off-roading” build according to Ford and features 33-inch MT Goodyear Wrangler tires (but with no “Wrangler” branding, a premium Hoss suspension system, and (most importantly) the front stabilizer bar disconnect system.

As such, it’s probably going to be the rock-crawling king of Broncos, even though Ford doesn't offer the Sasquatch package as a standard perk. The Wildtrack does include the goodies without an extra charge of $2,495 like on the Badlands but loses the dedicated Rock-Crawl G.O.A.T. mode as it’s more of a high-speed trail monster than anything else.

From the 5:30 mark we can see the Wildtrack’s own telltale signs, including the special cabin accents or the fact that a Badlands might again have the upper hand as far as the adventurous type is concerned, as the latter gets exclusive access to the marine grade vinyl interior and the wash-out floors (the interior peek comes from the 7:45 mark).

No (static) comparison would be complete without the design chapter, which comes from the 8:47 mark to discuss the grille and other differences. Don’t leave just yet, though, because from the 10:40 mark there’s also a belated bonus difference, as it appears that Sasquatched models don’t come with rear crash bars, unlike standard versions which have them. 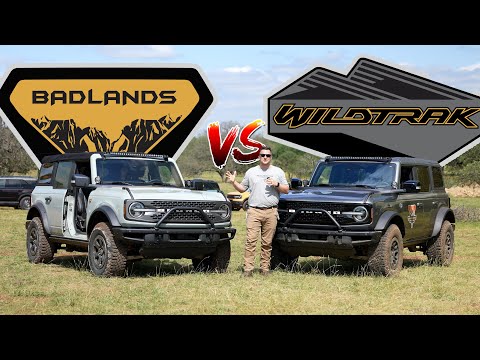